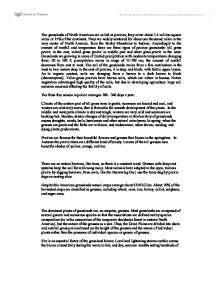 The grasslands of North American are called as prairies; they cover about 1.4 million square miles or 15% of the continent.

The grasslands of North American are called as prairies; they cover about 1.4 million square miles or 15% of the continent. They are widely scattered for about one thousand miles in the very center of North America, from the Rocky Mountains to Indiana. Accordingly to the amount of rainfall and temperature there are three types of prairies grasslands: tall grass prairie in the east, mixed grass prairie in middle part and short glass prairie in the west. Grasslands are growing in areas of limited precipitation with moderate temperatures changing from -20 to 100 F, precipitation varies in range of 15-100 cm, the amount of rainfall decreases from east to west. The soil of the grasslands varies from a few centimeters in the west to two meters deep in the east of prairies; it is deep and black, with fertile upper layers. As to organic content, soils are changing from a brown to a dark brown to black (chernozyoms). Taller-grass prairies have brown soils, which are richer in humus. Native vegetation advantaged high quality of the soils, but due to developing agriculture large soil erosions occurred affecting the fertility of soils. ...read more.

4. Variable precipitation: 6-40 in (15-100 cm). 5. Soils generally fertile, deep and rich; variable 6. Growing season of 120-200 days. 7. Generally flat to rolling topography cut by stream drainages where there is a riparian or river-bank habitat. 8. Scattered rain and lightening common in summer months ("convection storms") with more general rains and snows in winter months. 9. Fire a major factor in maintaining biome. STEPPE (GRASSLAND) CLIMATE. Grasslands are temperate environments, with warm to hot summers and cool to very cold winters; temperatures are often extreme in these midcontinental areas. They are often located between temperate forests and deserts, and annual precipitation falls between the amounts characteristic of those zones. Winds play an important role in these very open environments. Precipitation varies from highly seasonal to spread throughout the year. There is a substantial snow buildup in the northern part of the zone, which diminishes greatly to the south. SOILS. Grasslands are typically underlain by chernozems, soils that are alkaline because net water movement within them has been upward, carrying calcium with it which precipitates as calcium carbonate. ...read more.

It grows to 3 feet tall in moist shady woods. This adaptation helps the plant protect itself from grazers and people, too! Well, for one thing, much of the North American prairie land was turned into farms in the early 1900's so that people could make a good living growing and selling crops. Bison, which are often mistakenly called buffalo, were hunted to near extinction because their meat and hides were so valuable. Deer and antelope are still found in places like Wyoming, but the herds are dwindling. Prairies are famous for their beautiful flowers and grasses that bloom in the springtime. In Autumn the prairie takes on a different kind of beauty. Leaves of the tall grasses turn beautiful shades of yellow, orange, and tan. About one quarter of the earth's land is grasslands. The wild prairie has disappeared, for the most part, from the United States. Only a few spots of wild prairie remain. Because the soil is so productive and rich in nutrients, nearly all of the wild grasslands have been converted into commercial farms. Now the prairie feeds the nation and the world. Why do you think prairies are often called the "breadbaskets of the world?" ...read more.