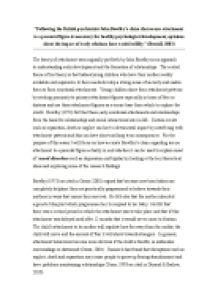 The impact of early secure attachment on relationships

﻿?Following the British psychiatrist John Bowlby?s claim that secure attachment to a parental figure is necessary for healthy psychological development, opinions about the impact of early relations have varied wildly.? (Bentall, 2003) ________________ The theory of attachment was originally put forth by John Bowlby as an approach to understanding early development and the formation of relationships. The central theme of his theory is that babies/young children who have their mother readily available and responsive to their needs develop a strong sense of security and enable them to form emotional attachments. Young children show their attachment patterns by seeking proximity to primary attachment figures especially in times of fear or distress and use these attachment figures as a secure base from which to explore the world. Bowlby (1973) felt that these early emotional attachments and relationships form the basis for relationships and social interactions later in life. Certain events such as separation, death or neglect can have a detrimental impact by interfering with attachment patterns and this can have short and long term consequences. For the purpose of this essay I will focus on how accurate Bowlby?s claim regarding secure attachment to a parental figure actually is, and whether it can be used to explain onset of mood disorders such as depression and bipolar by looking at the key theoretical ideas and exploring some of the research findings. Bowlby (1973) as cited in Gross (2001) argued that because new born babies are completely helpless, they are genetically programmed to behave towards their mothers in ways that ensure their survival. He felt also that the mother inherited a genetic blueprint which programmes her to respond to her baby. He felt that there was a critical period in which the attachment was to take place and that if this attachment was delayed until after 12 months that it would never come to fruition. The child?s attachment to its mother will regulate how far away from the mother the child will move and the amount of fear it will show towards strangers. ...read more.

The main criticism is that it excludes the important role of the father in the child?s development. It has also been criticised for confining women with children to the ?mothering role? and has failed to acknowledge the role of the child as an active agent in his/her social environment (Goodwin, 2003). Bowlby?s views of attachment and monotropy have been further criticised on a number of different levels. For example, infants and young children display a whole range of attachment behaviours to a wide variety of people in their lives as well as to their mother. While Bowlby did not deny the presence of multiple attachments he claimed the one to the mother was the most important. Kendler, Myers & Prescott (2000) however found no significant differences across any parenting dimensions for any disorder. Their findings suggested that parenting from fathers and mothers is equally important in influencing risk for psychiatric disorders and substance abuse. In a later research Heider, Matschinger, Bernert, Alonso & Angermeyer (2006) also found no significant difference between care of mother and care of father for the child. While there is much evidence to suggest that attachment patterns in childhood are reflective of attachment and relationships in later life there is a strong research base to suggest that it is not as simplistic as that. Schaffer (1998) as cited in Gross (2001) believed that psychological development is much more flexible than previously thought and our personalities are not fixed once and for all by events that occur in our early years. He felt that given the right circumstances, the effects of even quite severe and prolonged deprivation could be reversed. Clarke and Clarke (2000) also felt that relationships are not merely predetermined by the experiences of the early years alone but result from the combination of genetic and environmental interactions and transactions. Whilst they don?t dismiss the importance of early years Clarke et al (2000) ...read more.