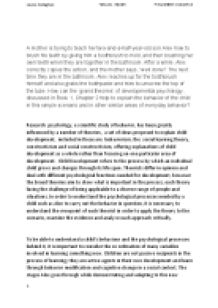 Two and a half year old Alex learns to brush his teeth by imitation. How can the grand theories of developmental psychology, discussed in Book 1, Chapter 2 help to explain the behavior of the child..

﻿Louise Callaghan TMA 01. ED209 PI NUMBER: C1322713 A mother is trying to teach her two-and-a-half-year-old son Alex how to brush his teeth by giving him a toothbrush to hold, and then brushing her own teeth when they are together in the bathroom. After a while, Alex correctly copies the action, and the mother says, ?well done!? The next time they are in the bathroom, Alex reaches up for the toothbrush himself and also grabs the toothpaste and tries to unscrew the top of the tube. How can the ?grand theories? of developmental psychology, discussed in Book 1, Chapter 2 help to explain the behavior of the child in this simple scenario and in other similar areas of everyday behavior? Research psychology, a scientific study of behavior, has been greatly influenced by a number of theories , a set of ideas proposed to explain child development, included in these are behaviorism, the social learning theory, constructivism and social constructivism, offering explanations of child development as a whole rather than focusing on one particular area of development. Child Development refers to the process by which an individual child grows and changes through its life span. ...read more.

The social learning theory does not explain all behavior, or consider other factors that may be influential to the child. Although cognitive function is evident in this theory, the internal nature of a child?s cognitive functions are not explained, value is placed on factors external to the child. Alex?s actions supports the social learning theory, Alex?s mum is providing a strong and desirable model of behavior , consequently Alex is observing and attending to the behavior of his mum and retaining the knowledge for future use, later he chooses to imitate it. Constructivism focuses on the natural stages of cognitive development in children, and sees learning as an individual constructive process, with the child continually building and modifying internal representations of the world. According to Jean Piaget (1896), children are born with reflex action patterns, which become modified, and built upon, through environmental interaction. Piaget (1896) held the view that the process of assimilation and accommodation represents cognitive development, meaning incorporating external reality into existing mental structures and modifying the knowledge, which takes place in three stages going from equilibration to disequilibration finally reaching a more stable equilibrium. ...read more.

In conclusion, the four grand theories proved applicable in influencing a child?s everyday behavior, each valuing the environment in the process of development, and together building a picture of a stage process. The relevancy and limitations of each theory to everyday behavior although important to consider, proved that even though each theory provided a limitation, interactions between a child and their environment is emphasized in different ways by every one of the theories and are intertwined and built on the understanding that either environmental or innate abilities drive the development of children. The four grand theories see development as a journey of social process, communication teaching and learning. Each individual child uses the crucial role of experience, interaction, control and discipline, as building blocks to be active in their own development. The coordination of the four grand theories provides an explanation of the behavior and cognitive function Alex needed for learning to brush his teeth. Proving that Alex?s actions of thinking, imitating and experiencing control through positive reinforcement, results in his social environment providing the context for cognitive adaptability to develop and progress the new behavior of brushing his teeth, with his mum providing the model for behavior and linguistic enhancement. Therefore, this behaviour is evident as showing how the grand theories of developmental psychology can help in explaining the behaviour of a child. ...read more.