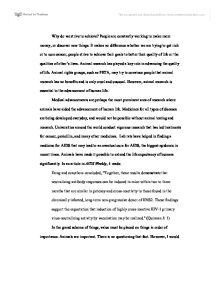 Why do we strive to achieve?

Why do we strive to achieve? People are constantly working to make more money, or discover new things. It makes no difference whether we are trying to get rich or to cure cancer; people strive to achieve their goals to better their quality of life or the qualities of other's lives. Animal research has played a key role in advancing the quality of life. Animal rights groups, such as PETA, may try to convince people that animal research has no benefits and is only cruel and unusual. However, animal research is essential to the advancement of human life. Medical advancements are perhaps the most prominent area of research where animals have aided the advancement of human life. Medicines for all types of diseases are being developed everyday, and would not be possible without animal testing and research. Universities around the world conduct vigorous research that has led treatments for cancer, penicillin, and many other medicines. Lab rats have helped in finding a medicine for AIDS that may lead to an eventual cure for AIDS, the biggest epidemic in recent times. Animals have made it possible to extend the life expectancy of humans significantly. In an article in AIDS Weekly, it reads: Dong and coauthors concluded, "Together, these results demonstrate that neutralizing antibody responses can be induced in mice within two to three months that are similar in potency and cross-reactivity to those found in the chronically infected, long-term non-progressive donor of HNS2. ...read more.

These are just some of the awesome advancements that animal research has provided. Almost all of the animals privately owned in this country are for personal use, or pets. They are a huge part of our lives and often become part of the family. We hand over thousands of dollars a year to pay for surgeries and medicines to help our pets live longer and healthier lives. My father often jokes that our dog is almost as expensive and demanding as his children. People are sad and often cry whenever a pet may die, and rightfully so. However, this medicine and technology for surgeries comes from the same animal research that provides knowledge for advances in human medicine. In an article from The Lantern, "There are 680 animal research projects being worked on now at OSU. Some of these projects are AIDS and malaria research in primates, hearing disorders in cats, muscular diseases in rabbits and cancer and immune system research in rats and mice" (Leonhard 1) Not only is OSU conducting research for human medicines, but they also work to improve the lives of cats. Ohio State is not the only place where this is taking place. It is happening at universities all over the world. If animal research is so cruel, then why would it be working towards the advancement of animals? Animal rights groups are very opposed to animal research. They often impede this advancement using protests, the media, and even force. ...read more.

It is quite possibly the darkest time in the history of the world. PETA had the audacity to compare those concentration camps, where millions fell victim to the genocide, to the turkeys on the turkey farms where they are raised for consumption. How dare PETA insult so many innocent people viciously murdered to a few thousand turkeys raised for food. That is an insult to the Jewish people, and all of those murdered at the concentration camps. When asked to explain that comment, Ingrid Newkirk, President of PETA, said, "It's not an insult. It's a fact that a concentration camp is where living beings are cramped together without any freedom to move or escape. I don't think nature's kind, but human beings can be far crueler than nature" (Walters 2). Ingrid Newkirk just proved her own point. That was the cruelest comment I believe any human could have possibly made. Animal research is one of the most valuable tools in learning more about not only animals, but also the human body and medicine. When hearing all of the misleading information about cruelty to animals and all of the horrible things done to animals in research, stop and think, why. Why would scientists want to ruin their own hard work and research by treating their test subjects cruelly? Why would they want to impair their results and eventual findings by mistreating the animals that will lead them to their answer? It is common sense. Animal research is invaluable to improving human life and it would be a travesty to let that go to waste. ...read more.