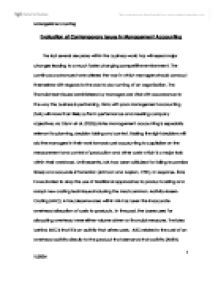 Evaluation of Contemporary Issues in Management Accounting The last several decades within the business world has witnessed major changes leading to a much faster changing competitive environment. The continuous advances have altered the way in which managers should conduct themselves with regards to the day to day running of an organization. The financial techniques administered by managers are vital with accordance to the way the business is performing. Firms with poor management accounting (MA) will more than likely suffer in performance and meeting company objectives. As Glynn et al. (2003) states management accounting is especially relevant to planning, decision taking and control. Making the right decisions will aid the managers in their work towards cost accounting to capitalize on the measurement and control of production and other costs which is a major task within their work load. Until recently, MA had been criticized for failing to provide timely and accurate information (Johnson and Kaplan, 1991). In response, firms have started to drop the use of traditional approaches to product costing and adopt new costing techniques including the most common, Activity-Based-Costing (ABC). A troublesome area within MA has been the inaccurate overhead allocation of costs to products. In the past, the bases used for allocating overhead were either volume driven or financial measures. The idea behind ABC is that it is an activity that drives costs. ABC relates to the cost of an overhead activity directly to the product that demands that activity (Atrill & McLaney, 2002). ABC systems refine costing systems by focusing on individual activities as the fundamental cost objects and are more finely structured costs in the cost pool along with their cost drivers which lead to more accurate costing of activities. ...read more.

can support managers to see how shareholder value can be maximized and how corporate performance can be improved. Proctor (2006) defines ABM as a collection of actions performed by managers based on the information produced by an ABC system. In order to manage costs, a manager should focus on the activities that give rise to such costs. Accordingly, given the activity focus of ABC, managers should implement ABC systems in order to facilitate financial management. The goal of ABM is to improve the value received by customers and, in doing so, to improve profits which will be advantageous for the organization in the long run. The key to ABM success is distinguishing between value-added costs and non-value-added costs. A value-added cost is the cost of an activity that cannot be eliminated without affecting a product's value to the customer. In contrast, a non-value-added cost is the cost of an activity that can be eliminated without diminishing value. Some value-added costs are always necessary, as long as the activity that drives such costs is performed efficiently. However, non-value-added costs should always be minimized because they are assumed to be unnecessary. Oftentimes, such non-value activities can be reduced or eliminated by careful redesign of the plant layout and the production process. This will help benefit the organization for the future as costs can be reduced in one area of the firm and placed into another area with the general objective to help boost sales levels. Using a cost management system has helped enterprises in answering the market need for better quality products at competitive prices. Analyzing the customer and product profitability, the ABC method has continued effectively for the top management's decision making process. ...read more.