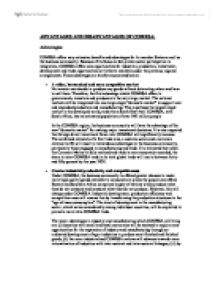 Advantages and disadvantages of Comesa.

ADVANTAGES AND DISADVANTAGES OF COMESA: Advantages: COMESA offers very extensive benefits and advantages for its member States as well as the business community. Because of its focus on full private sector participation in integration, COMESA offers new opportunities for industrial, production, investment, development and trade opportunities not hitherto available under the previous regional arrangements. These advantages are briefly enumerated below: * A wider, harmonized and more competitive market No investor can decide to produce any goods without determiing where and how to sell them. Therefore, the first advantage which COMESA offers to governments, investors and producers is the very large market. The national markets will be integrated into one large single "domestic market" to support new and expanded production and manufacturing. This is perhaps the largest single market in the developed world, aside from South East Asia. COMESA, with South Africa, has an estimated population of over 360 million people In the COMESA region, the business community will have the advantage of the new "domestic market" for making major investment decisions. It is also expected that foreign direct investment flows into COMESA will significantly increase. The combined elements of a free trade area, a customs union and a common external tariff, will result in tremendous advantages to the business community, particularly those engaged in manufacturing and trade. It is estimated that when the Common Market is fully realized and trade is more accurately recorded, the share in intra-COMESA trade in its total global trade will rise to between thirty and fifty percent by the year 2020. * Greater industrial productivity and competitiveness Under COMESA, the business community is offered greater chances to make more high quality goods available to consumers at prices the people can afford. Eastern and Southern Africa comprises largely of nations which produce what they do not consume and consume what they do not produce. However, this will change under COMESA. ...read more.

was actively discouraged, resulting in insufficient levels of investment taking place in both capital and labour and in low levels of technology transfer; and a lack of complementarity between domestic industries. 3. Initially, import substitution programmes were financed from domestic earnings, such as revenues realised from sale of primary agricultural commodities and minerals. As levels of revenue from these sources declined, owing to declining terms of trade and reduced efficiencies in production systems, these countries started borrowing on western capital markets, and from the World Bank and IMF, to maintain previous levels of consumption. As many of the countries concerned where at this stage considered to be middle-income countries, they borrowed at commercial rates. The borrowed money was usually not used to improve production so real levels of GDP continued to decline while expenditure levels, which had by then risen significantly, as a result of higher debt servicing payments, continued to increase. 4. Governments of COMESA countries faced these economic crises by continuing to borrow on international markets; placing heavy restrictions on foreign currency transactions to try to reduce capital flight; pegging the value of the local currency against freely convertible foreign currencies artificially high to reduce costs of essential imports (such as fuel which in itself caused crises in the early 1970s); using revenues from parastatal industries to finance the public sector recurrent budget, leaving little revenue for re-investment in these strategic industries, resulting in further declines in production; reducing the import bill by restricting by statute items which could be imported; and heavily subsidising all aspects of domestic agricultural production to promote self-sufficiency in food production, which only served to make agriculture sectors even more inefficient than they already were. 5. This package of economic policies has contributed significantly to the economic decline of the region and to Africa's gross domestic investment having fallen consistently for the last 20 years, being currently recorded at 17 per cent of GDP. ...read more.

The African continent's share of world manufacturing value added (MVA) rose from 0.7 per cent in 1970 to 1 per cent in 1982 and fell to 0.8 per cent in 1994. Most African industries have a very low capacity utilisation rate and current structural adjustment programmes have as yet to have a positive impact on the industrial sector. 16. Population is expanding at a rate of around 3.2 per cent, outstripping agricultural and food production and COMESA now has twice the population it had in 1965 and more than five times the population it had at the beginning of the century. 17. The region has also experienced, over the last few years, unprecedented droughts, leading to widespread food shortages and famine. There is growing and widespread poverty in the COMESA region, especially among the rural communities, aggravated by the decline in expenditures on social services, including health, education and public utilities, nutrition has worsened and mortality continues to increase. 18. There is a major crisis in employment in all countries, especially among the youth in cities and towns. Unemployment in most countries is as much as 30 per cent or more of the active labour force and under-employment is just as serious. The majority of the region's population still dwell in the villages and earn their living cultivating between one and fifteen hectares. 19. The COMESA region has also had to contend with civil strife, ethnic wars and political instability which have also contributed to the decline in economic growth. 20. In summary, the economic performance of the COMESA region has been rather disappointing over the last two to three decades, with overall economic growth of the COMESA region having averaged 3.2 per cent a year since 1960 and only marginally above the level of the region's population growth. By 1993, this region of over 280 million people, which has more than doubled its population since independence, had a total GDP of around US$90 billion, and included fifteen of the twenty-three States classified as Least Developed Countries (LDC's) by the United Nations. ...read more.