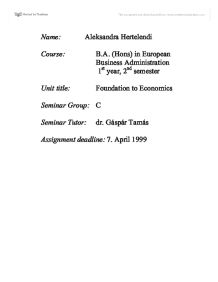 Analyse the debt of Hungary in the 1990's. Use economic theory to explain the relationship of debt with the macroeconomic aims and indicators.

Name: Aleksandra Hertelendi Course: B.A. (Hons) in European Business Administration 1st year, 2nd semester Unit title: Foundation to Economics Seminar Group: C Seminar Tutor: dr. G�sp�r Tam�s Assignment deadline: 7. April 1999 Title: Analyse the debt of Hungary in the 1990's. Use economic theory to explain the relationship of debt with the macroeconomic aims and indicators In this assignment I would like to state first what government debt is and how does it affect the economy. We would like to analyse the debt of Hungary in the 1990's from 1990 to 1997, with the help of data collected by the K�zponti Statisztikai Hivatal (Central Statistical Office), and the reports provided by the Hungarian Ministry of Finance1. At the end we would also like show what implication debt had on macroeconomic aims and indicators of Hungary. Just before starting we would like to define what macroeconomic aims and indicators are. The main macroeconomic indicators of a country are the GDP, the current balance of payment, the inflation rate, the rate of unemployment, the amount of debt etc. The macroeconomic aims, goals of a country are high and stable economic growth (steady growth in real GDP), low unemployment, low inflation, and the avoidance of balance of payment deficits and excessive exchange rate. ...read more.

5Which is again a contradiction to one of the macroeconomic aims of an economy that is high and stable economic growth . Having known all these we can look at how the deficit and debt formed in the period 1990-1997. The analysis of debt in the 1990's For analysing the debt in Hungary in the 1990's we would like to use Tables 1, and 2 in the Appendix.6 . In Table 1 we can see the percentage change from year to year of GDP, which reflects the economic growth of the country, it also shows the unemployment rate, the current account balance, the amount of foreign debt. Table 2 shows the current account balance and external debt as a percentage of GDP. These all will be needed for the analysis and to draw conclusion how debt has affected the macroeconomic aims and indicators. We would also like to use Diagrams 1-4,6. Two main periods can be distinguished in all 4 diagrams. The first period between 1990-1994, and the second period between 1995-1997. From 1991, we can see a rapid economic growth (there was a need to change the whole economic system), and this economic growth had commenced alongside decline of inflation, resulted in a dramatic increase of imports and a rapid increase of indebtedness of the state and the country. ...read more.

There were good steps toward reducing unemployment, but the unemployment rate is still too big and something should be done about the black labour force market as well as there are many people working unregistered, that is they have incomes without paying taxes. It is very good that the exchange rate between the dollar and Hungarian Forint is not fluctuating, that is it is stable. The deficit of the budget is still too big. It would be essential to reduce this to the extent so that no primary deficit would be achieved so as to stop the increase of internal debt. If the internal debt is too big there will be inflation again which is not good for the economic development of the country. To the extent of economic policy definitely retains the requirement of improving competitiveness and the of preserving equilibrium for the following years. It will be possible for the economic development of Hungary and her economic policy to get over the decades' old dilemmas of "balance or growth" and "stimulation or restriction" and a balance keeping economic growth based on the improvement of competitiveness may gradually accelerate. This would be very essential to achieve as Hungary wishes to be part of the European Union soon, which may also arise new economic problems, and in the meantime better solutions for the country. ...read more.