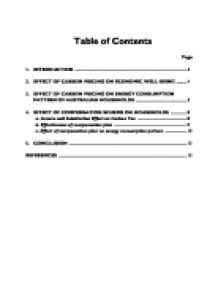 Table of Contents Page 1. INTRODUCTION 3 2. EFFECT OF CARBON PRICING ON ECONOMIC WELL-BEING 4 3. EFFECT OF CARBON PRICING ON ENERGY CONSUMPTION PATTERN OF AUSTRALIAN HOUSEHOLDS 5 4. EFFECT OF COMPENSATION SCHEME ON HOUSEHOLDS 8 a. Income and Substitution Effect on Carbon Tax 8 b. Effectiveness of compensation plan 9 c. Effect of compensation plan on energy consumption pattern 10 5. CONCLUSION 12 REFERENCES 13 1. INTRODUCTION On Sunday 10 July 2011, Australian Prime Minister Jullia Gillard announced the long awaited details of Australia's carbon pricing mechanism. The goal of this scheme is to reduce emission of greenhouse gases which adversely affects environment. The establisment of this scheme encourages the use of renewable energy as well as alternative energy. As expected, the programme will cover most sectors excluded agriculture. Households are not subjective to carbon tax, but apparently being affected indirectly through the increase in market price. Approximately, 500 large companies will be directly liable for the carbon price. The programme will be in effective from 1 July 2012 (Deloitte 2011) The introduction of carbon pricing mechanism is attached to the compensation scheme applicable to household sector. Approximately 50% of revenue generated from the scheme will be used to compensate households via increases in familiy benefit payments, pensions. ...read more.

Figure 2. Effect of Carbon Tax on Australian energy consumption pattern in short run In short run, large increase in price of goods using traditional energy sources results in small reduction in quantity demanded for those goods. Price Consumption Curve demonstrates the enerrgy consumption pattern of households as price of goods increases. As price of goods increases from P1 to P3, quantity demanded fall from Q1 to Q3. The trend in short run is illustrated as a steep and downward sloping curve, which is indicates an inlastic demand for those godds in the short run. * In the long run : The scheme also functionates a AUD$1.2 billion Clean Energy Finance Corporation (CEFC) which will invest in the developmnet of renewable energy, energy efficiency and low emissions technologies (Deloitte 2011). As other alternative sources of energy are cheap enough due to innovations, households might switch from carbon-intensive energy to alternative energy. Another assumption is the increase in income of households in the long run. A small increase in price of traditional energy causes a large reduction in quantity demanded for this source. This indicates a elastic demand for goods using carbon-intensive source in the long run as being showed in Figure 3. ...read more.

Australian households energy consumption pattern will be affected by changes of income. Income consumption curve (ICC) demonstrates the energy consumption pattern in the consideration of changes in income. Figure 6 shows two different ICCs. ICC1 and ICC2 shows the energy consumption pattern before and after the compensation programme takes place accordingly. As income increases, households can buy more goods. In long run, households tend to consume less carbon-intensive goods and switch to low-carbon goods at each income level. ICC is therefore steeper than before the payments system comes into effect. Figure 6. Compensation effect on energy consumption pattern of households 5. CONCLUSION The purpose of this paper is to indentify and evaluate the effect of Carbon Pricing Mechanism on Australian households through economic matters. The very first impact appears to have detrimental effect on households income, especially low to middle household group. This group accounts for a large proportion of Australian population. For this reason, there are numerous debates around the feasibility of this scheme. Some pessimists argue this scheme would lead to high unemployment and weakening Australian purchasing power as the result of price increase. However, applying new scheme receives positive feedbacks from environmental activists and promisely to create a cleaner Australia. It is too hasty to jump on conlusion whether this scheme succeeds or not. All the matter will be answered in the most comprehensive way no sooner than 3 years from now. ...read more.