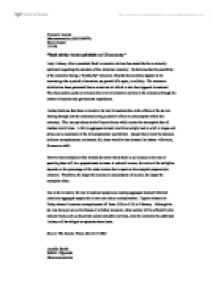 Economic Journal Macroeconomics (MANG0079) Bruce Rayton 13/3/02 "Bush advisor turns optimistic on US economy" Larry Lindsay, who is president Bush's economic advisor has stated that he is currently optimistic regarding the situation of the American economy. He believes that the possibility of the economy facing a "double-dip" recession, whereby the economy appears to be recovering after a period of recession yet growth falls again, is unlikely. ...read more.

This concept relates to the Keynes theory which rejects the assumption that all markets would clear. A fall in aggregate demand would not simply lead to a fall in wages and prices and a restoration of the full-employment equilibrium. Instead there would be demand-deficient unemployment: as demand fell, there would be less demand for labour. <Slowman, Economics:460> However the multiplier effect denotes the trend where there is an increase in the rate of spending there will be a proportionate increase in national ...read more.

Due to the incentive for new investment people are creating aggregate demand followed closely by aggregate supply this in turn can reduce unemployment. Figures released on Friday showed American unemployment fell from 5.6% to 5.5% in February. Although the tax cuts have put an end to threats of a further recession, other sectors will be affected by the reduced funds such as the private sector and public services, once the economy has stabilised Lindsay will be obliged to replenish these funds. Source: The Sunday Times, March 10 2002 Jennifer Smith IMML 1 Spanish Macroeconomics ...read more.