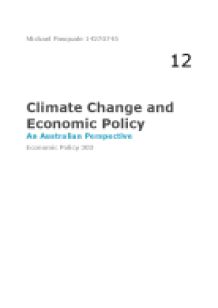 ﻿Michael Pasquale 14270745 12 Climate Change and Economic Policy An Australian Perspective Economic Policy 302 ________________ Climate change is defined as ?Change of climate which is attributed directly or indirectly to human activity that alters the composition of the global atmosphere and which is in addition to natural climate variability observed over comparable time periods?(Bruno and Mehmet 2010). Modern methods of production create greenhouse gasses as a negative externality via the market failure and government intervention is needed to rectify the situation. Climate change is an issue for the Australian government as it needs to intervene to correct the market failure caused by the free markets inability to provide property rights to mitigate damages caused by the negative externality. (Calhoun 2010) The greenhouse gas externality is a by-product of the production of goods and services via the over-production of emissions. Dr Peter John Wood argues that? climate change is an indisputable threat? and on that basis, as well as the world stage Australia has taken the reins in acting upon climate change. An externality is defined as? are the unintended consequence of one economic agent?s economic activity that affect another agent?s economic activity, but which are not adequately priced through the market (Sonia and Jeff 2011)?. This is also known as market failure and requires government intervention to be able to rectify the problem due to a lack of property rights and correct mitigation for parties involved with the transaction. In this case, one form of the market failure is because the cost of CO2 is not factored into the transaction price. The Gillard government continued a legacy that was started with the Howard government back in 2007 that saw a Carbon Emissions Trading scheme take part in the Australian government to tackle Australia?s greenhouse gas emissions (Chris 2011). ...read more.

This will vary from firm to firm due to the elasticity of the cost to pollute. It is safe to assume that all firms are elastic with pollution expenses; therefore the economics of the tax are sound. Pigovian taxes have been praised for their simplistic approach to combating both losses of competitiveness due to inefficient methods of production and on goods themselves which are non-essential for consumption when viable substitutes are available according to Harris?s economic survey in 2012. Examples include using solar power on mine sites instead of Gas or Coal power. Pigovian Taxes however are not ideal in the case of Carbon Leakage, whereby firms choose to produce their goods offshore in countries that are not yet or not participating in Carbon Reduction. It reduces Australia?s carbon footprint, however the loss of production in Australia mean relative to before the tax, there is a reduction in output. (Dellaware 2011). By contrasting these to alternative methods to combat climate change such as an Emissions Trading Scheme (Cap and Trade) or the Carbon Offset system. All theoretically are able to reduce the level of the negative externality, however they all have different dynamics to each other and need to be applied using the framework aforementioned in the essay. The Cap and Trade system allows for the Coasian Bargaining of the right to emit greenhouse gasses as part of production of a firm. These permits would be of a set supply, and would limit firms to a ?cap? of pollution. These would be traded in the open market meaning that the market subject to demand and elasticity by a firm, determines the price of the permit. ...read more.