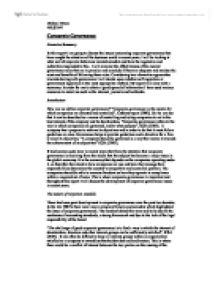 Corporate Governance Executive Summary In this report I am going to discuss the issues concerning corporate governance that have caught the attention of the business world in recent years. I will be looking at what sort of corporate behaviour created scandals and how the regulators and authorities responded to this. I will examine the effectiveness of the current governance rules that are in practice and conclude if they are adequate and analyse the costs and benefits of following these rules. Considering two alternative approaches towards dealing with governance I will decide upon whether self regulation or government legislation is the most appropriate method. My report will close with a summary. In order for me to obtain a good spread of information I have used various resources to assist me such as the internet, journals and textbooks. Introduction How can we define corporate governance? "Corporate governance is the system by which companies are directed and controlled", Cadbury report (1992). So we can see that it can be described as a means of controlling and ruling companies to act in the best interest of the company and its shareholders. "Corporate governance refers to the way in which companies are governed, and to what purpose", ICSA (2003). A company has a purpose to achieve its objectives and in order to do that it must follow guidelines or rules. Governance helps to provide guidelines and a direction for a firm to meet its objectives. "A company should be governed in a way that moves it towards the achievement of its objectives" ICSA (2003). It has become quite clear in recent years that from the attention that corporate governance is receiving from the media that the subject has become a major issue in the global economy. It is the economy that depends on the companies operating under it, so therefore the extent to how companies are run and how they manage their responsibilities determines the country's competitive and economic position. ...read more.

Dan Roberts, Financial Times, (20 April 2005). How adequate are the current codes The first code of practice was The Cadbury report dating back to 1992 and many attempts followed which led to the construction of The Combined Code in 1998 which was later refined in 2003, 2005 and more recently in 2006. "Following a review of the implementation of the Combined Code in 2005, the FRC consulted on a small number of changes to the Code. These changes were incorporated in an updated version of the Code published in June 2006." http://www.frc.org.uk/corporate/combinedcode.cfm (08/11/06) The most up to date rules are put together in The Combined Code which focuses on a number of key points. It emphasises on the independence of directors within the board and states that the board should have a balance of executive and non- executive directors and particularly emphasises on a company having non-executive directors in their remuneration committees. "The code states that the majority of the members of the nomination committee should be independent NEDs". PensionsWeek (Oct 2, 2006). The act also encourages shareholder involvement in order to keep their interests at heart. In my opinion The Combined Code is a good deterrent for directors acting out of their own interest. It ensures more independence within an organistaion by distancing professionals to avoid conflicts of interests that can help to prevent company failure. The Sarbanes-Oxley act was introduced in 2002 by the US government in response to the Enron and WorldCom scandals. The key points of the act aim at the independence of the audit committee in order to ensure the auditors' independence from their clients. It outlines the responsibilities of auditors and encourages increased disclosure of the internal control structure of firms and procedures for financial reporting. If the auditors are entirely independent of the board then this can help to ensure that the accounts show a fairer view and can also help prevent fraud. ...read more.

Overall summary Throughout this report I have examined the various issues that concern corporate governance. My findings are that the standard of corporate governance has improved considerably since the late 1980's where it became a major concern. This is mainly due to the number of major scandals that have led to better rules being introduced. However there is still need for improvement in a rapidly changing business environment where even after new rule being introduced and enforced new scandals arise to the surface. I have found that the main reason behind corporate governance is the corruption within organisations. The realisation of this issue has led to the levels of corporate governance being raised. "To contribute to high standards of corporate governance, public governance must be effective, transparent, and accountable-hence the serious concern with bribery and corruption." Iskander Magdi R, Chamlou Nadereh (2000) Another issue that has caused controversy is the value of the shareholder, "It is sometimes noted that shareholders are the 'missing link' in corporate governance." Steger Ulrich, George Bill (2004). In the past the importance of the shareholder has been ignored but new rules introduced are aimed at putting shareholders' interests at hearts such as The Combined Code encourages shareholder involvement. The role of governance plays an important part to ensure that the organistaion runs fairly. However in order for a good governance system to operate, directors and shareholders should get involved, but in reality this model is not always used. Often it is the case of just an enforcement of power over controlling the organization. "Corporate governance is not about power but about ensuring that decisions are made effectively... What is needed is a system in which senior managers and the board truly collaborate on decisions and both regularly seek the input of shareholders." Harvard business review on corporate governance (2000). Governance is more than just enforcing power and legislation it is about effectively managing a corporation with the input of its members to ensure fair and efficient operations. It is an important issue which affects the business world and will continue play an important role in the future. ...read more.