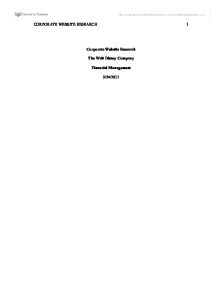 Corporate Website Research The Walt Disney Company Financial Management 3/24/2011 The Walt Disney Company is the largest media and entertainment conglomerate in the world in terms of revenue. I am eagerly waiting to learn how the Company works in each of their divisions and which divisions are growing and which divisions are in a decline. How The Company prioritizes their resources is information that I am looking to get out of my research. The main website for Disney (www.disney.go.com) is primarily a vehicle to advertise and promote the Disney Channel as a media outlet. Disney's corporate site (http://corporate.disney.go.com/) focuses more on the company's business as a whole. The corporate home page breaks the company across their four main divisions: The Walt Disney Studios or Studio Entertainment, which includes the ...read more.

This site provides countless amount of information on the company's financial dealings as well as corporate governance and citizenship. Disney has also made their 2011 Meeting of Shareholders available to view via web cast through their investor relations site. This unique feature will allow for Disney to have more fluid communication and connectivity to their shareholders and potential investors as well. The Disney stock price is displayed as $42.86 a share as of 4 PM on March 24, 2011 ("The Walt Disney Company Investor Relations"). The Walt Disney Company's 2010 Annual Report can also be easily accessed from the Disney corporate site. In this 120 page document income statements, balance sheets, and statements of cash flow for the 2010 fiscal year can be found. ...read more.

Iger in his letter to shareholders included in the Annual Report. In the letter he explains the company's operations for the year 2010, going into detail on the company's success and challenges. Disney benefited from the success of films Toy Story 3 and Alice in Wonderland, each totaling over one billion in world-wide box office gross. Iger also explained benefits that the company's acquisition of Marvel Entertainment will have on shareholders both in the short and long term. The review of a corporation's web site and how it relates to financial management is very important. I learned a great deal from my analysis of Disney website, especially into their investor relations. The company places an emphasis on each of their division, as all four contribute to the company's mission statement. I can now do more in depth research into a company's financial information after my review of Disney. ...read more.