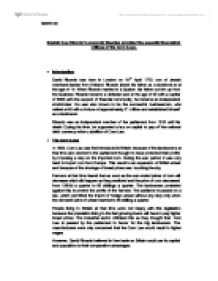 Explain how Ricardo's economic theories provided the essential theoretical critique of the Corn Laws. * Introduction David Ricardo was born in London on 19th April 1772, son of Jewish merchant-banker from Holland; Ricardo joined his father as a stockbroker at the age of 14. When Ricardo married to a Quaker, his father cut him up from the business. Ricardo became a Unitarian and at the age of 22 with a capital of �800 with the support of financial community, he became an independent stockbroker. He was also known to be the successful businessmen, who retired at 42 with a fortune of approximately �1 million and established himself as a landowner. Ricardo was an independent member of the parliament from 1819 until his death. During his time, he supported a tax on capital to pay off the national debt; currency reform; abolition of Corn Law. * The Corn Laws In 1804, Corn Law was first introduced in Britain because of the landowners at that time who elected in the parliament thought to have protected their profits by imposing a duty on the imported corn. During the war period, it was very hard to import corn from Europe. This result to an expansion of British wheat and because of the shortage of bread prices was touching the sky. ...read more.

When population of a certain area rises, more food is required and less land is planted. Rent is the difference in the price of wheat per acre between the superior and inferior productive land. As population grows, rent increases with capitals profits and labours wages. Landlords and capitalist were necessary enemies. Ricardo explained that due to increase in the population rate, farmers should also prefer less productive land. According to Ricardo's experience, a bushel of corn which was from a less productive land should sold for the same price as a bushel of corn produced from a highly productive land. Therefore, tenant farmers would have to pay more to rent the highly productive land. This means there is no absolute rent i.e.-e rent paid for cultivating land of the poor quality. The rent that is differential rent which is paid to the owner for the use of superior quality land, as farmers prefer land of increasing inferior quality under cultivation. The rent as a whole goes to the owner of the land resulting in the landowner making a profit and the farmer actually losing money by paying to much rent. "Rent is that portion of the earth, which is paid to the landlord for the use of the original and indestructible powers of the soil." ...read more.

He also argued that two nations could both benefit from trade if each has either comparative or relative advantage. This means that the ratio of labour used in two goods will be different between two countries, in a way that each country will have one good where the labour of the production of commodity will be less then the other county. * Conclusion In conclusion, by discussing the theories we can see that a rise in population affect wages in the same way it affects rent. An increase in population results in rent to increase because less fertile land must be cultivated in order to provide the necessity of food for the people. There fore the land with the higher value must pay a rent that is equal to the difference between the produces of higher and the lesser valued land. Similarly, a country should become specialised in products and services in which they have a comparative advantage. They should then trade with other countries that have products in which that country also has a comparative advantage. If so both countries will be, better off and continue to grow in wealth and financial status. I think Ricardo's theory plays a significant role with in the corn laws as according to Ricardo country must be allowed to trade free of duty with foreign countries in order to maximise their capital. ...read more.