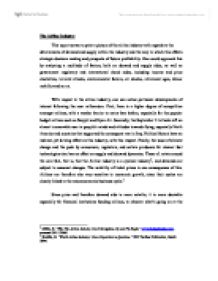 Determinants of demand and supply of UK Airline Industry

The Airline Industry This report serves to paint a picture of the airline industry with regards to the determinants of demand and supply within the industry and the way in which this affects strategic decision making and prospects of future profitability. One could approach this by analyzing a multitude of factors, both on demand and supply sides, as well as government regulatory and international shock sides, including income and price elasticities, terrorist attacks, environmental factors, oil shocks, retirement ages, labour mobility and so on. With respect to the airline industry, one can notice particular developments of interest following the new millennium. First, there is a higher degree of competition amongst airlines, with a weaker barrier to entry than before, especially for the popular budget airlines such as Easyjet and Ryan Air. Secondly, the September 11 attacks left an almost irremovable scar in people's minds and attitudes towards flying, especially North America and countries that supported the consequent war in Iraq. ...read more.

This results since demand is generally static in the short run in the industry. Some of the losses from September 11 were resulted in bankruptcy for many firms, including Swissair, Sabena, U.S. Airways, and United Airlines. 100,000 airline employees in the United States alone lost their jobs. Some argue that it may have been this weakening of the 'giants' that weakened barriers to entry and gave way for the low-cost end of the spectrum (budget airlines) to flourish.7 Easyjet boosted revenues in 2002 by 35 percent, and Ryan Air (Ireland) increased before tax profits by 71 percent. One of the fundamental questions however, is how long will this effect (terrorist fears) last? These low cost airlines are also to be blamed for sever cost cutting and price wars, since consumers can fly to the same destination for sometimes a tenth of the price charged buy the larger airline firms. This means that these larger firms have to significantly alter their business models both for now and the future. ...read more.

The danger in doing this however, is that oil prices are so volatile, that they may go the other way in a short period of time, and actually cost the industry more money. If it does work however, hedging can save a lot of money. Southwest Airlines for example (USA based budget airline) hedged 80% of its fuel requirements in 2004, and saved itself $53.2 million a year.11 Now, global airline cumulative losses as a result of oil price hikes are estimated at $ 42 billion, since 2001.12 In conclusion, the airline industry needs heavy structural reforms, to be able to fight several battles. Low cost budget airlines on the one hand, and extremely high oil prices on the other (with OPEC planning to cut production soon so as to bring about an internationally 'fair' oil price of $60). Security assurance also needs to be developed so as to increase consumer confidence (or stop people from fearing flying due to terrorist attacks). Word Count: 1025. ...read more.