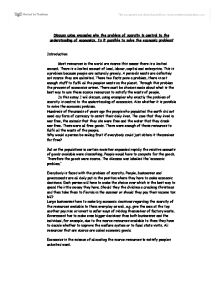 Discuss using examples why the problem of scarcity is central to the understanding of economics, Is it possible to solve the economic problem?

These two competing systems of allocation make up the meat of economic science as they seek to deal with the problems of scarcity. They do this by tackling it in three different areas. These are what to produce, how to produce and who to produce for? A society will have to ask what to produce because they cannot produce everything due to the scarce nature of its resources. The society will have to make a decision over whether it's better producing food or shelter. Is it better feeding the population or protecting them from the harsh elements. The second question the society would have to ask itself is how to satisfy most wants of the people by using as little of its already short supply of resources as possible. Which process generates the highest output in relation to its input? Which production method is the most efficient? These are really important questions as resources are scarce in relation to unlimited wants. This question is more complicated than it first seems because of the potential ethical implications of the most productive methods of allocating scarce resources. For example, a very efficient method of picking cotton is to capture hundreds of uncivilised African people, transport them to the cotton fields then tell them that they are going to work from sunrise to sunset or else they will be beaten. ...read more.

This would cause a situation where the two high quality factors are forced to be useless because there is no tools for the people to use and nobody to tell them what to use them for. So far I have discussed, with examples, why the economic problem is central to the understanding of economics and that we only have the process of economics because we have the problem of scarcity. There is then the question of whether it is possible to solve the economic problem. There are two ways of solving the economic problem. The first way is to increase the amount of resources on the planet, the second way is to stop peoples want for things. Both socially are impossible to achieve. There will always be a limit on what resources are available, they may be able to improve the factors of production in some countries with good management but never to the extent where all the wants of people are satisfied. It would be even more difficult to put a cap on the amount of material goods a person wants. People are always looking to improve their quality of life by acquiring new possessions and partaking in activities. These wants will always increase, it will be impossible satisfy them all as new ones would appear. Peoples wants are continually expanding, developing and changing. ...read more.