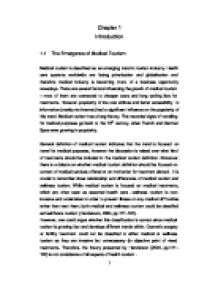 Dissertation on medical tourism. Most of the publications on medical tourism are focused on the phenomenon of the trend and its risks and benefits for patients; however, researcher is hoping to study the subject of inequalities that local communities of

Chapter 1 Introduction 1.1 The Emergence of Medical Tourism Medical tourism is described as an emerging trend in tourism industry. Health care systems worldwide are facing privatisation and globalisation and therefore medical industry is becoming more of a business opportunity nowadays. There are several factors influencing the growth of medical tourism - most of them are connected to cheaper costs and long waiting lists for treatments. However, popularity of low cost airlines and better accessibility to information (mainly via Internet) had a significant influence on the popularity of this trend. Medical tourism has a long history. First recorded signs of travelling for medical purposes go back to the 19th century, when French and German Spas were growing in popularity. General definition of medical tourism indicates that the trend is focused on travel for medical purposes, however the discussion is raised over what kind of treatments should be included in the medical tourism definition. Moreover, there is a debate on whether medical tourism definition should be focused on content of medical services offered or on motivation for treatment abroad. It is crucial to remember close relationship and differences of medical tourism and wellness tourism. While medical tourism is focused on medical treatments, which are often seen as essential health care, wellness tourism is non-invasive and undertaken in order to prevent illness or any medical difficulties rather than treat them; both medical and wellness tourism could be classified as healthcare tourism (Henderson, 2004, pp.111-122). However, one could argue whether this classification is correct since medical tourism is growing fast and develops different trends within. Cosmetic surgery or fertility treatment could not be classified to either medical or wellness tourism as they are invasive but unnecessary (in objective point of view) treatments. Therefore, the theory presented by Henderson (2004, pp.111-122) is not considerate of all aspects of health tourism. Smith and Puczko (2009, p.7) demonstrated much more developed classification of health tourism: Figure 1.1 Classification of health tourism As presented in the figure 1.1 health tourism is levelled and represents several products that are sometimes not recognised as health tourism (e.g. ...read more.

approach characterise in: * 'Social reality is multiple, divergent and interrelated * Analysis from the actor's own perspective * Human behaviour is how people define their own world * Reality is the meaning attributed to experience and is not the same for everyone'. In general, positivism is the type of research that seeks to explain human behaviour through cause and effect, while phenomenology research is based on understanding and interpretation of human actions and behaviour through researcher's own perspective. Since the research was initially concerned purely about phenomenon of new trend in tourism industry - medical tourism, its trends, destinations and tourist motivation but was later developed into discussing problem of inequalities and ethical concerns of medical tourism and risks it creates not only for customers but mainly for local communities, triangular research will be carried out - it will allow researcher to use both quantitative and qualitative research methods. 3.3 Primary and secondary data collection While doing research, it is important to indicate what data collection methods will be the most effective. It should be evaluated whether primary data is essential for the research or if secondary data will be enough to present reliable research results. A lot of the time, information needed for research is already completed and going into expenses of collecting new information may not be necessary. Even if secondary research is not exactly what researches if looking for, it can often provide an interesting facts that will enrich project in general (Veal, 1998, p.33). Secondary data are 'those that have already been collected, possibly by some other individual or organisation and for some other purpose' (Cooper et al, 2008, p.86). Primary data, on the other hand, is a process of collecting data by researcher. In tourism, the most popular method of collecting data is sample survey (either of visitors or of businesses). There are four main types of survey; those are personal interview, telephone interview, web-based survey and postal survey (Cooper et al, 2008, p.86). ...read more.

There will always be supporters and opponents of the trend and as far as it is absolutely acceptable, the researcher finds it essential, for local communities and medical tourists to be aware of both, advantages and disadvantages of the trend in order they can make a reasonable decision based on credible data. Recommendations for researcher would be to look into this subject area further and investigate what local communities think about this emerging trend. In relation to make the trend more appropriate from ethical point of view, local communities should have access to the hospitals designed for tourists. It is, however, difficult to achieve - private hospitals are expensive and if locals will be allowed to use it for free then it is some sense kind of inequality again - why does foreigner have to pay for the treatment and local does not? In order to avoid issues like this, international regulations have to be applied. But how to organise it if several countries still have not fully recognised the trend, not even mentioning about the problems that it may cause? Even if it happens; how to control regulations on such a wide level? Creating international regulations regarding medical tourism, applying them and then controlling whether they are being carried out appropriately is expensive and time consuming - in extreme scenario, it may put a strain on international relations. Would it not be easier, cheaper and quicker to recognise the problem within the countries so that patients are not at the must of travelling abroad in order to obtain health care that is, according to United Nations Economic and Social Council (2000), fundamental human right? The answer is, that it probably would, but at the present, with the business of medical tourism and 'buying health' developing quicker than ever and surely, there are organisations or even counties (e.g. India - with its government trying to promote it as an ultimate medical destination and goes as far as creating medical visas - Medical Tourism: A global analysis, 2006, p.71) that are determined not to let that happen. ...read more.