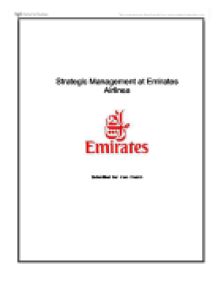 Emirates Airlines. The first part of the report provides a brief overview about Emirates Airlines Company followed by a situation analysis that includes the internal and external analysis. The last section will be concluded with the current situation alon

Strategic Management at Emirates Airlines Submitted for: Iman Finaish 1 Abstract This conducted report discusses a strategic study about the global airline industry, particularly Emirates Airlines. The first part of the report provides a brief overview about Emirates Airlines Company followed by a situation analysis that includes the internal and external analysis. The last section will be concluded with the current situation along with suggesting major issues that Emirates Airlines should address. 2 Table of Content 3 INTRODUCTION 4 4 EXTERNAL ENVIRONMENT 5 4.1 INDUSTRY ANALYSIS 5 4.1.1 Airline industry General Profile 5 4.1.2 Life Cycle 6 4.1.3 Porter's 5 Forces 7 4.1.4 Key Competitors 9 4.1.5 Key Success Factors 10 4.1.6 PEST Analysis 11 4.1.7 Summary of External Environment 13 5 INTERNAL ENVIRONMENT 14 5.1 SWOT ANALYSIS 14 5.2 SUMMARY OF INTERNAL ENVIRONMENT 16 6 CONCLUSION AND RECOMMENDATION 17 7 REFERENCES 20 3 Introduction "Emirates Airlines goals for the immediate future and long term are, to be the best in every venture it undertakes; to meet its customers' expectations profitably, to contribute to the success of Dubai Inc., and to make the city the new global aviation hub for the 21st century." Emirates Chairman, Sheikh Ahmed Al Maktoom In 1985 Emirates Airlines was established by Dubai Government with just two aircrafts. Today Emirates has 83 aircrafts files to 78 destinations in 55 countries worldwide. It has a large number of cabin crews from 95 nationalities. It recently made an aircraft orders worth more than $ 26 billion for 45 Airbus A380, which makes the company the world's largest purchaser of Airbus's super-jumbo. (About Emirates) Emirates Airlines recently becomes one of the fastest growing airlines and the fifth-most-profitable airline in the world. It has been growing by more than 20% a year since the last 17 years making a profit of $637 million in 2004-05. (BBC News) Emirates Airlines is committed to achieve its mission, namely "offering consistently high-quality value-for-money service and to be the best airline on all of its routes". ...read more.

(American Airlines) 4.1.5 Key Success Factors To maintain airlines companies' success, various key factors should be implemented for this purpose: * Differentiation Airline companies tend to differentiate by providing advanced services. For example, providing the aircraft with the latest technology, such as wide seats, e-ticketing (as mentioned in 5 porters section) will attract customers and distinguish the company among other companies. (ex: British Airways). * Strong brand name Obtaining a strong brand name plus building a base of loyal customers are the carriers' companies most concern. It guarantees that customers will stick with the strong brand name company and ignore any attractive offers form other competitors. Some airline companies utilize some techniques to have a retain customers, such as offering a flyer mile to win a free ticket if the points were completed. (ex: American Airline) * Alliances Airline industry is moving toward establishing alliances between companies. This will let companies to share resources via linking their networks to build a wide base of customers, develop services and increase number of routes. Additionally, it results in sharing experience and decreasing the operation costs. Ex. British Airways is a member of largest airline alliance known as "Oneworld". * Relations with supplier Airline companies must build a strong relation with suppliers by setting long-term contracts with them. Such relations will benefit the airlines companies, because this will keep them in the safe side even if there was any change in the pricing strategy (ex. increasing costs) in the future as there is a contract between them. The PEST analysis is the best way that leads companies to change their strategies. 4.1.6 PEST Analysis * Political factors The airline industry is affected by political situations, namely wars and terrorism. For instance, terrorists' activities in different areas globally, namely USA (11th Sep), UK, Lebanon and Qatar made the regions unattractive for tourists and business travelers and reduce the passenger's traffic. ...read more.

* What major issues should Emirates Address? As the Airline industry is in the maturity stage, there is a strong competition between airline firms. Each firm should use offensive strategies besides doing analysis for internal and external factors that may affect its position. The research and analysis for Emirates airlines address following recommendations: The operational cost is increasing due to huge investments of Emirates on aircrafts and services and increase in fuel prices. Emirates should reduce the costs by making operational improvements, namely improving maintenance processes, maintaining high aircraft utilization and making effective flight scheduling. It could also be reduced by investing technology in distribution channels to reduce labor costs. For instance , it is recommended to install more self service kiosks in airports of the destinations of Emirates airline since it has already install ones in Dubai airport. In response to the threat of low cost airlines, Emirates shouldn't lower its fares after years of offering advanced services, instead it has to offer new low cost brand as a subsidiary of Emirates group serving economic travelers who are now customers of new low cost airlines, thus expanding the market share. Extending routes is recommended especially there is a growth in tourism UAE. There are main regions in the world that Emirates do not have routes in, namely Canada, It has to extend destinations worldwide (especially attractive areas). Joining a global alliance enables increasing its destinations, offering more fare options for customers helping to solve problems of new low cost airline. Investigating technology is recommended for improving customer service and Emirates has to sign contract with an e-business company that offers airlines technology solutions. E-CRM strategy is a new technology that Emirates should implement since internet users' number is increasing. It allows managing long term relationships with customers (Jiang, 2003). Generally, Emirates should do analysis for internal and external factors and its competitors and develop new strategies to stay competitive in the maturity stage. ...read more.