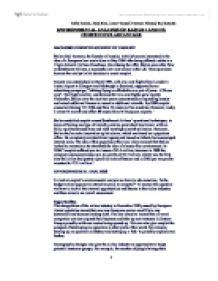 Environmental Analysis of Easyjet and Its Competitive Advantage.

ENVIRONMENTAL ANALYSIS OF EASYJET AND ITS COMPETITIVE ADVANTAGE BACKGROUND/DEVELOPMENT OF EASYJET Stelios Haji-Ioannou, the founder of easyJet, initially became interested in the idea of a European low-cost airline in May 1994 after being offered a stake in a Virgin Atlantic Airlines franchisee. On refusing the offer, Stelios soon after flew on Southwest Airlines, a successful low-cost carrier in the US. This experience became the catalyst in his decision to create easyJet. EasyJet was established in March 1995, with low-cost flights from London's Luton Airport to Glasgow and Edinburgh in Scotland, supported by an advertising campaign, "Making flying as affordable as a pair of jeans - �29 one way". The flight was full, and demand for low-cost flights grew rapidly. Thereafter, Stelios over the next two years concentrated on expanding easyJet and raised additional finance to invest in additional aircrafts. By 1998 easyJet owned six Boeing 737-300s and flew 12 routes in five countries. However, today it owns 64 aircraft and offers 88 routes from 36 European airports.� Stelios modelled easyJet around Southwest Airlines' operational techniques, in terms of having one type of aircraft, point-to-point short haul travel, with no-frills, rapid turnaround time and with very high aircraft utilization. However, Stelios had an extra innovation up his sleeve, which was based on a paperless office. ...read more.

The introduction of high-speed trains, like Eurostar, who run the channel tunnel rail link also offer quick journeys, with which people may feel are more reliable and safe relative to air travel. EASYJET'S COMPETITIVE POSITION To answer this question we will look at, 'how well placed easyJet is to compete'. I will look at easyJet's internal strengths and weakness' and come to an overall assessment of how well placed it is. Strengths A key strength that EasyJet have been able to develop over the years is that it has a very efficient process of management. For example, EasyJet's cost base is a definitive strength that has partly led to their success in the airline industry. What is it that makes easyJet's prices cheap? Looking at the formal aspects of easyJet, we can see that they have sought to minimise costs where possible and a number of operations were set up to help them achieve this. For example, they managed to save �24 per passenger by not offering a meal service and flying into London's Luton Airport relative to Gatwick. Costs were also cut by not offering business class seats, allowing for more seat capacity. EasyJet's merger with low cost airline 'GO' also gives them the scope to expand on its operation and they can benefit from this by gaining economies of scale, thus reducing costs. ...read more.

Will there be another event like September 11th? Such factors can most certainly affect demand for air travel. There may also be place for the traditional government-backed flag carriers, which may challenge the low budget air travel industry. With Stelios leaving easyJet, it is debatable whether or not this could turn out to be a strength or a weakness for easyJet. The notion of Stelios being the 'people's man' could be seen as strengthening aspect in boosting easyJet's customer base, as customer satisfaction and marketing were given top priority. On the other hand his entrepreneurial management style may have posed a threat, for example, refunding every one of his passengers in the Swissair battle over the Geneva-Barcelona flight could have exposed easyJet to high fixed cost and low margins, hence having a knock-on effect on the business's Cost-Volume-Profit analysis, which may put easyJet in the 'red'. So, we can see that there are both positive and negative aspects concerning easyJet's environmental analysis and competitive position. APPENDICES The style of writing the group decided to adopt was in a 'deductive' tone. All the data used was secondary data and using a deductive style of writing meant that there was a lack of primary data used. We started by analysing the theory researched and then looked at the data to back up our reasoning. The strategy we adopted was in the form of a case study and grounded theory. ...read more.