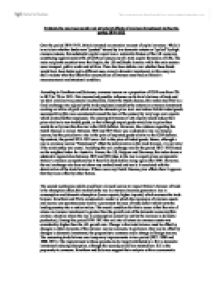 Evaluate the macroeconomic and structural effects of overseas investment during the period 1870-1913.

Evaluate the macroeconomic and structural effects of overseas investment during the period 1870-1913 Over the period 1870-1913, Britain invested an extensive amount of capital overseas. While it is not clear whether funds were "pushed" abroad by low domestic returns or "pulled" by high overseas returns, this substantial capital export was a noticeable feature of the UK economy, constituting approximately 4% of GDP per annum out of a total capital formation of 12%. The main recipients countries were the Empire, the US and South America while the main sectors were transport, public works and utilities. There has been debate over whether these funds would have been better put to different uses, namely domestic investment; in this essay we shall evaluate what the effect this accumulation of overseas asset had on Britain's macroeconomic and structural condition. According to Rowthorn and Solomou, overseas income as a proportion of GDP rose from 2% in 1872 to 7% in 1913. This income had possible influence on Britain's balance of trade and we shall examine two potential mechanisms, firstly the Dutch disease; this makes itself felt in a fixed ...read more.

which worsens the trade balance. Rowthorn and Wells constructed a model in which the expansion of overseas assets and income can spontaneously lead to a permanent balance of trade deficit which turns the lending country into a rentier nation. The crucial condition for this to occur is that the rate of return on overseas investment is greater than the growth rate of the domestic economy (this creates a situation where the rise in consumption cannot be met by the increase in domestic production). During this period 1870-1913 the real rate of return on overseas assets was considerably higher than the UK growth rate. Change in the trade balance must be offset by changes in other elements of the national income accounts. In particular, they can be offset by changes in domestic investment, the propensity to consume and a change in foreign income. The worsening trade balance saw temporary improvements in two period (1877-1890 and 1898-1913). The improvement in those periods can be largely attributed to a fall in domestic investment reducing absorption, although the second period was assisted by a fall in the propensity to consume. ...read more.

Unemployment was connected with the capital export debate: Hobson proclaimed in 1911 that in view of the high level of capital exports, "we cannot wonder at the increase in unemployment and of distress among the working classes". Had capital been diverted from foreign to home destinations, it might have absorbed this unemployed or underemployed labour without endangering the rate of its own return. It seems there were notable adverse consequences of excessive overseas investment. However, there is opposition to this view in that keeping investment domestic would have ineffective; for example, McCloskey quoted famously that "by keeping savings at home, the British people could have had two Forth bridges, two bakerloo lines, two London housing stocks, two Port Sunlights". In addition British investment in overseas capital lowered the price of foreign foodstuffs and raw materials. This improved Britain's terms of trade by approximately 0.1% per annum. In conclusion it is difficult to state whether the overall macroeconomic and structural effect of overseas investment over the period 1870-191 was positive or negative. ...read more.