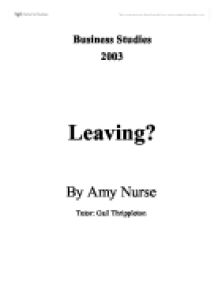 Investigate the causes of labour turnover.

Business Studies 2003 Leaving? By Amy Nurse Tutor: Gail Thrippleton Abstract Leaving? A question all employers ask of their staff if they leave the company is, why are you leaving and what might make you stay? The manager of Company X has such questions. He wishes to find out how the current employees feel and how he can reduce the labour turnover at Company X. This report looks into all the possible reasons for high level of labour turnover, specifically the reasons at Company 1X and how it can be reduced. Acknowledgements I would like to take this opportunity to thank all the staff at Company X who helped me successfully complete my study. I would also like to thank my parents and friends for their constant support throughout this year, which has been extremely difficult for me due to some personal problems. Their constant help and support has made it possible for me to be able to complete my final year. Table of Contents ABSTRACT 1 ACKNOWLEDGEMENTS 3 1. INTRODUCTION 5 1.1 Aims of the Study 7 2. LITERATURE REVIEW 8 2.1 Labour Turnover 8 2.2 Labour turnover in the UK 8 2.3 Labour turnover in the retail industry 9 2.4 Costs for companies with high labour turnover 11 2.5 Ways to control turnover 14 2.6 The reasons for labour turnover 17 2.7 Labour turnover at Company X 20 4. FINDINGS 27 5. CONCLUSIONS AND RECOMMENDATIONS 39 BIBLIOGRAPHY 43 APPENDICES 45 1. Introduction Leaving? Why do people leave companies? Labour turnover is a serious problem for many companies across all UK industries, and is also very costly. This case study looks into the retail industry and specifically into one store, which is part of a large retail outlet group. For security reasons the company cannot be named and will therefore be referred to throughout the piece as Company X. It has been ascertained that the head office of Company X has conducted its own research into the issue of labour turnover. ...read more.

planning that needs to be accounted for, the significance of labour turnover to the company and the measurement methods used to analyse labour turnover. There is also an indication of the possible reasons for and costs of labour turnover. These texts also offer theoretical solutions for control of labour turnover. After studying academic texts I started to look closer into the subject by getting information from the CIPD. This information consisted mainly of figures for the percentages of labour turnover in the UK broken down by industry and job type. The costs of labour turnover per employee were also calculated and detailed by Industry and job type. The CIPD have also looked into the reasons why people have left their job and those figures are also detailed. The information in this report has been calculated from figures from the Labour Force Survey, which is carried out by, The Office for National Statistics, a government agency, The remainder of the statistics were ascertained from a questionnaire sent by the CIPD to 10,000 personnel professionals during June and July 2000. 629 organisations with a total work force of over 863 000 responded. This information was originally intended for the report and has been analysed by the CIPD this information is appropriate to this study as it is being used in this case for the statistical analysis of the UK retail industry. The problems of reliability validity and bias may exist within the primary research completed for the report. The CIPD will have avoided this. Once the theoretical and statistical analyses had been collected and analysed I needed more information on the possible reasons for labour turnover in general and why people leave specific companies. I used Internet search engines such as Google.com to locate information about labour turnover. I also looked at academic reports i.e. Mintel, Emerald and EBSCO on the universities website. The information collected from there was mainly reports from other companies about labour turnover problems and how they were overcome. ...read more.

A longer initial trial period and better training on entry to the store should increase the staying power of the new recruits. The initial welcome to the store and training will have an effect on how satisfied they are in the employment. The researcher thinking back to her first day at the store recollects that they were not even introduced to all the managers let alone their colleagues and has also noticed the same with any other new people starting. This needs to be rectified as a common courtesy as well as to improve early communications. Pay was another problem that the employees expressed, a comment made by a managers was 'if you pay peanuts you get monkeys' this though not an appropriate way to look at staff, is true if the company wish their staff to be more satisfied, on a basic level pay will make a difference. Job satisfaction and working relationships are key issues but increase in basic pay levels will improve job satisfaction as people value what they pay for staff who are paid more feel valued. The sales people do earn commission, which increases there earning potential and the system for commission has just been altered giving them greater earning potential. However for the other colleagues pay is low some did mention that being paid on a more regular basis might help. Not necessarily weekly but perhaps fortnightly. Logistically and cost wise for the company this may not be feasible but may be worth looking into as it may end up costing less when taking into consideration the amount it costs per employee that leaves. There are many possible scenarios available to Company X in order to increase employee satisfaction and decrease the chances of high labour turnover. Some are matters to be dealt with at store level and others at head office. One small change to improve the feeling of worth of the employees and how valued they feel to the company are they thanked for their efforts. Some times the smallest gestures can make the biggest improvements. ...read more.