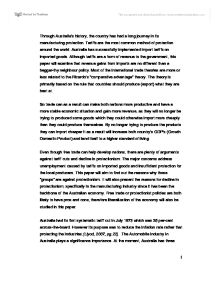 Is Trade Liberalisation a Friend or Foe of Australia ?

Through Australia's history, the country has had a long journey in its manufacturing protection. Tariffs are the most common method of protection around the world. Australia has successfully implemented import tariffs on imported goods. Although tariffs are a form of revenue to the government, this paper will examine that revenue gains from imports are no different than a beggar-thy neighbour policy. Most of the international trade theories are more or less related to the Ricardo's "comparative advantage" theory. The theory is primarily based on the rule that countries should produce (export) what they are best at. So trade can as a result can make both nations more productive and have a more stable economic situation and gain more revenue, as they will no longer be trying to produced some goods which they could otherwise import more cheaply then they could produce themselves. By no longer trying to produce the products they can import cheaper it as a result will increase both country's GDP's (Growth Domestic Product) and lend itself to a higher standard of living. Even though free trade can help develop nations, there are plenty of arguments against tariff cuts and decline in protectionism. ...read more.

It should be noted that the 1991 Statement came in the midst of a recession. Import quotas for PMV were ended in 1 988 and TCF in 1993. In addition, In Australia, they include the effect of persistent analysis and commentary by the independent statutory authority (first the Tariff Board and then its successors, the Industries Assistance Commission, the Industry Commission and the current Productivity Commission), better measures of average tariffs and non-tariff measures and last and most fundamentally the influence of economic theorist who have finally persuaded more and more people and groups that trade liberalisation is in the national interest. During 1977-1988, Corden (1996) states that the government received only two commission report whereas it received 32 reports on what should be done for tariff rates and international trade. Therefore this is highly relevant and it needs to be taken into consideration among the other economical related issues on why the protection has fluctuated but mostly declined over the years. It is known that currency depreciations cause imported good to be more expensive for domestic buyers. Depreciation also leads growth in exports. According to Corden (1986. pg.148), due to the decline in the terms of trade, during 1985-1986 the dollar significantly depreciated and as a result, domestic manufacturers and export industries ...read more.

Australia `s protectionist actions did harm the country in the past. It is very likely that if a country implements trade barriers on other countries they will also be subjected trade barriers by other nations. As a result of this action in the end both countries will loose. In the course current depreciation of Australian dollars due to the world economical crisis, it would be beneficial for Australia to liberalise its economy more than it has ever attempted. The reason why Australia should liberalise more is simply, the depreciation of the Australian dollar will attract foreigners. Hence, Australia can export its goods that have comparative advantage; however, it will be hard to conclude that it also will attract importers due to Australian dollar devaluation. Once again in terms of the economy, it is about a decision making process where pros and cons must always be considered. However, this gain is likely to help Australian economy more than its loss on imports. In relation to imported goods, the Australian domestic economy will be less competitive against imports because lack of competition. On the other hand, this export-orientated situation will lead to decrease unemployment by employing more people within the local industry. Graph 1: Effective Rates of Protection in Australia Source : Productivity Commission, Protectionism Review2001-02 Table 2: ERP Rates Compared 1989-90 to 1996-97 Source : ABS (Australian Bureau of Statistics. ...read more.