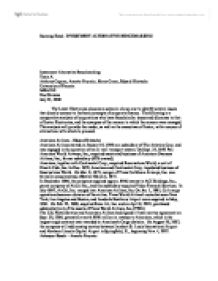 Running Head: INVESTMENT ALTERNATIVE BENCHMARKING Investment Alternative Benchmarking Team A: Anthony Capone, Annette Fournier, Karen Green, Eduard Hristache University of Phoenix MBA/540 Paul Stevens July 21, 2008 The Lester Electronics classroom scenario allows one to identify several issues that directly connect to the basic concepts of corporate finance. The following is a comparative analysis of corporations who have faced similar issues and dilemmas to that of Lester Electronics, and the synopses of the manner in which the concern was managed. This analysis will provide the reader, as well as the executives of Lester, with a source of alternatives with which to proceed. American Airlines - Eduard Hristache American Airlines started on January 25, 1930 as a subsidiary of The Aviation Corp. and was engaged in the operation of an air mail transport system. On Sept. 25, 1950 Pan American World Airways, Inc., acquired assets and business of American Overseas Airlines, Inc., former subsidiary (62% owned). American, together with Continental Corp., acquired Reservations World, a unit of Diner's Club, Inc. In Dec. 1970, American and Continental Corp. liquidated business of Reservations World. On Mar. 8, 1971, merger of Trans Caribbean Airways, Inc. was formally consummated, effective March 2, 1971. In December 1986, the company acquired approx. 80% interest in ACI Holdings, Inc., parent company of AirCal Inc., and thru subsidiary acquired Video Financial Services. In July 1987, AirCal, Inc. merged into American Airlines, Inc. On Jan. 1, 1991, Co.'s cargo operations became a division of the airline. Trans World Airlines' routes between New York, Los Angeles and Boston, and London's Heathrow Airport were acquired in May, 1991. On Feb. 23, 1999, acquired Reno Air, Inc. and on April 9, 2001, purchased substantially all of the assets of Trans World Airlines, Inc. (TWA) The U.S. Postal Service and American Airlines had signed a 5-year service agreement on Sept. 20, 2006, potentially worth $500 million in revenue to American, which is the largest single contract ever awarded to American's Cargo division. ...read more.

Stocks that are too expensive are less liquid than stocks that are traded at a cheaper price. Stocks that are not easily liquidated will reduce to return the stockholder receives. Stockholders demand a high expected return for their investment (Ross, Westerfield & Jaffe, 2004, p. 335). The factors to ascertain the liquidity of stocks vary. Corporations lower the trading cost of their stocks in order to lower the cost of capital. Michael Grey, the chief executive at Lilly says for companies like Eli Lilly and SGX Pharmaceuticals, to find investors is an arduous task and the acquisition was the best option for both companies (Somers, 2008). India Finance - Eduard Hristache The volatility in global currency markets has led several Indian companies to sue their banks for losses on foreign-exchange derivatives. April is results season for corporate India, and as the numbers for the past fiscal year trickle in, so do revelations about losses on foreign-exchange (forex) products. Due to forex, some Indian companies may end up with notional, marked-to-market losses of around Rs120bn-200bn (US$3bn-5bn) on forex derivatives. India's largest lender, the State Bank of India, said on April 22nd that its clients alone are likely to show marked-to-market losses of between Rs6bn and Rs7bn on such derivatives for the 2007/08 financial year. The first warning came in late November 2007, when software company Hexaware Technologies announced that it would suffer some actual losses on forex derivative deals. However, as more companies have subsequently revealed their own forex derivative woes, it has become clear that the problem is widespread. Over the past two years, the Indian rupee has appreciated against the US dollar on the back of strong forex inflows and the weakness of the dollar, appreciating about 12% in fiscal 2007/08. At first, the rise of the rupee caught many companies unawares: many IT companies, for example, were badly hit by the sharp depreciation in the dollar, due to inadequate hedging. ...read more.

The text states that a company can come up with different sources to come up with and use cash. "A decrease in networking capital or fixed assets leads to a decrease in cash, or an increase in long-term debt or equity can lead to an increase in cash" (Ross, Westerfield & Jaffe, 2005, Ch. 26). With the Anheuser-Busch case we can see how Brito uses financial leverage in order to invest in Anheuser-Busch as debt is an important form of financing and provides a significant tax advantage because interest payments are tax deductible, although this can cause some conflict between creditors and equity investors. Creditors lean towards less risky ventures than equity investors" (Ross, Westerfield & Jaffe, 2005, Appx. 2A). In the case with Yahoo! we can observe the how shareholders can control managerial behavior. We can observe that Yahoo shareholders want to sell to Microsoft to get fast and good return. On the other hand, we can see how the executive board is trying to keep Yahoo in business and at the same time thinking about wealth maximization, by asking the shareholders to allow more time to the board, so that they can present a better wealth maximization plan, keeping in mind Yahoo's reputation in the Internet business. In Yahoo's situation, although shareholders have in mind wealth maximization, their move can be observed as profit maximization than wealth maximization. Yahoo's executive board is trying to act on the best interest of the shareholder, who have been "brainwashed by Carl Ichan, that selling to Microsoft in the best move" (Bostock & Yang, 2008). In comparison to the scenario we can see that both LEI and Shang-wa and Yahoo and Microsoft, are dealing with the preassure of making the best decision in the best interest of the shareholders, that although, have similar ideas to wealth maximization, both companies are looking at different approaches on how to achive so. Yahoo's shareholders are looking for themselves, but its executives are working in the best interest of the shareholders and the company. ...read more.