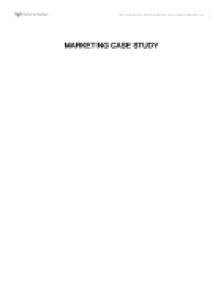 MARKETING CASE STUDY Table of Contents 1. Introduction and History 2. The Mission Statement of easyJet 3. Competitive Analysis (Porters five competitive forces) 4. Marketing Mix 5. SWOT Analysis 5.1 Internal Analysis - Strengths and Weaknesses 5.2 External Analysis - Opportunities and Threats 6. Situational Analysis 7. PEST Analysis (Marketing Plan) 8. Conclusion 8.1. Strategic Issues facing the airline Industry 8.2. easyJet's future 9. Appendices 1. Introduction and History A successful example of a European no frills airline is easyJet. Stelios Haji-Ioannou (Greek) founded the company in 1995. It is based on the low-cost, no-frills model of the US carrier Southwest. The concept of easyJet is based on the belief that demands for short-haul air transport is price elastic. That means, if prices for flights are being reduced, more people will fly. Traditionally airline concepts are based on the assumption that airline traffic grows in line with the economy and that cutting prices will only lead to a decrease in revenues. With the introduction of the 'no-nonsense' concept to the European market, after its deregulation in 1992, easyJet has proven this theory wrong and goes from strength to strength by actually increasing the size of the market and more recently by taking away passengers from the majors (see www.easyjet.com for passenger figures, financial data and employee statistics). Today, it offers 125 routes from 39 European Airports (see www.easyjet.com for route launch dates), with Luton, Liverpool, Geneva, Amsterdam as base airports1 and is operating 72 aircrafts (November 2003). November 1995: easyJet starts flights from Luton to Glasgow and Edinburgh with to leased Boeing 737-300 with a capacity of 148 seats at a price of �29 one way. Seats are being sold over telephone reservation system only. In 1996 easyJet takes delivery of its first wholly owned aircraft and goes international with first services to Amsterdam from Luton. One year later easyJet launches its website, easyjet.com which will from 1998 onwards form an integral part of the business concept (and which provides for some 90% of the bookings today2). ...read more.

6. Situational Analysis easyJet seems to be positioned very well with experts predicting excellent growth opportunities for the low cost-sector. Given the saturated market and the shortage of other options in the UK, competition is likely to intensify - inevitably followed by consolidation, an early sign of which is easyJet's purchase of GO. The UK market offers little growth opportunity, therefore concentration will be on the continental market, a step forward in this direction is setting up a major new base at Berlin, with flights from 11 European cities9, and possibly as well on Eastern Europe. Focus remains on pricing Strategy and expansion of its route network. Promotion needs to persuade people that it is safe to fly and establish easyJet as Europe's largest low-cost carrier (as easyJet is already doing in its advertisement: "Size matters!") 7. PEST Analysis - Marketing Plan PEST analysis for easyJet for the next 5 years The following factors are likely to have an influence on the airline industry and should therefore be taken into account when formulating a Marketing Plan for easyJet. Politico-legal factors * Threat of war in the Middle East * The Air Miles scheme is not considered as a taxable perk by the government in the way that company cars are taxed which may change to allow easyJet to compete on more equal grounds with the likes of BA. * A EU east-enlargement may provide access to viable, new markets. Economic factors * Likelihood of increasing fuel costs, congestion and other environmental restrictions, as well as the prospect of higher security and insurance costs to reflect the risk of terrorism. * As the recession is likely to last for some more time, business travellers will keep an eye on their travel expenses. * Globalisation should continue to boost traffic in the long-term. * The introduction of the single currency in Europe is likely to bring more business to easyJet as Europe becomes more integrated. ...read more.