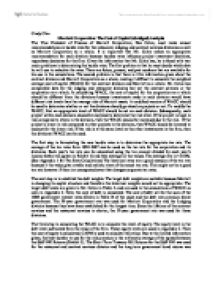 Cindy Chin Marriott Corporation: The Cost of Capital (abridged) Analysis The Vice President of Finance of Marriott Corporation, Dan Cohrs, must make annual recommendations on hurdle rates for the restaurant, lodging, and contract services divisions as well as Marriott Corporation as a whole. It is important that Mr. Cohrs makes an appropriate recommendation for each division because hurdles rates influence project investment decisions, repurchase decisions for the firm. Given the information that Mr. Cohrs has, he is faced with two major problems in determining the hurdle rates. The first problem is that he must decide which data he will use to calculate the rates. There are future, present, and past numbers that are available for his use in the calculations. The second problem is that there is little information given about the contract division and Marriott Corporation as a whole, making it difficult to calculate the weighted average cost of capital (WACC) for the contract division and Marriott as a whole. Mr. Cohrs has comparable data for the lodging and restaurant divisions but not the contract services or the corporation as a whole. ...read more.

The next step is to establish the debt weights. The target debt weights are suitable because Marriott is changing its capital structure and therefore the historical weights would not be appropriate. The target debt levels are given to Mr. Cohrs in Table A and are used in the calculations of WACC as seen in Appendix 2. Next, the cost of debt is calculated. The cost of debt will be the sum of the 1988 government interest rates (Given in Table B of the case) and the debt rate premium above government. The 30-year government rate was used for Marriott Corporation and the Lodging division because they have been established for the longest time. Since the lifetime of the contract services and the restaurant services is shorter, the 10-year government rate was used for those divisions. The third step in calculating the WACC is to calculate the level of equity. The equity level is the debt level subtracted from the value of the firm. These equity levels are used in Appendix 2. Then the cost of equity is calculated. ...read more.