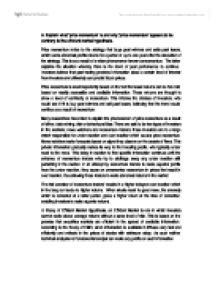 Price momentum refers to the strategy that buys past winners and sells past losers, which earns abnormal profits returns for a period of up to one year after the execution of the strategy. This is as a result of a wider phenomenon known as momentum.  The latter explains the situation whereby there is the trend of past performance to continue.  Investors believe that past trading provides information about a certain level of interest from investors and ultimately can predict future prices.

Price momentum is most importantly based on the fact that asset returns can be fore told based on readily accessible and available information. These returns are thought to show a level of continuity or momentum. This informs the choices of investors, who would see it fit to buy past winners and sell past losers; believing that the trend would continue as a result of momentum.

Many researchers have tried to explain the phenomenon of price momentum as a result of either, data mining, risk or behavioural bias.There are said to be two types of investors in the markets; news watchers and momentum traders; these investors are to a large extent responsible for under reaction and over reaction which causes price momentum.  News watchers make forecasts based on signs they observe on the assets of firms. This private information gradually makes its way to the investing public, who typically under react to the news. This delay in reaction to firm specific information continues until the entrance of momentum traders who try to arbitrage away any under reaction still pertaining in the market. In an attempt by momentum traders to make superior profits from the under reaction, they cause an unwarranted momentum in prices that result in over reaction, thus allowing these traders to make abnormal returns in the market.

The risk aversion of momentum traders’ results in a higher delayed over reaction which in the long run leads to higher returns.  When stocks react to good news, the anomaly which is corrected at a latter period, gives a higher return at the time of correction, enabling investors to make superior returns.

In theory of Efficient Market Hypothesis, an Efficient Market is one in which investors cannot make above average returns without a same level of risk. This is based on the premise that securities markets are efficient in the spread of available information.  According to the theory of EMH, when information is available it diffuses very fast and efficiently and reflects in the prices of stocks with minimum delay. As such neither technical analysts nor fundamental analyst can make any profits on such information.

This implies that information is readily and swiftly available to all who seek it, and is immediately incorporated into the prices of stocks; preventing the ‘experts’ from making any abnormal returns in the market without any risks. As such there is no free ‘lunch’. This indicates that there is a fair playing field for all in the market, and no investor is with any specialist knowledge that can make superior returns on any stock.

This is evidently contrary to the phenomenon of price momentum, which plainly indicates that psychology of investors can explain the condition where investors make superior returns in the market, due to the trend of return performance. Price momentum explains that, there is a predictable pattern to stock prices and as such investors who follow closely can and do make superior returns. This indicates a certain level of irrationality among investors whilst the Efficient Market Hypothesis claims that the market is made up of rational investors, making rational decisions based on accurate readily available information. This propounds the belief that the stock market has no memory and past prices are not a practical determinant of how stocks would behave in the future.

Price Momentum empirical concept was first documented by Jagadeesh et al (1993) , with a proposal that stocks with a holding period of 3-12 months which give poor(high) returns over the past 3-12 months should give below (above) returns in the next 3-12 months.  The sample of stocks was taken from AMEX and NYSE  over a period from 1965 to 1989.The model assumes that stock market is not based on the EMH, which has been accepted by many and is the foundation for ongoing debates on the price momentum model .The practical implications from the model however are that

As to considering the external factors that govern the presence of price momentum were documented by Daniel et al(1998) , who suggest that investors are highly overconfident about their private information and attribute the success to their own intuitive skills and any failure to external noise surrounding the arrival the public information. This overconfidence will actually continue until the investors correct themselves in the longer run and past errors are avoided, thus in the process triggering short run momentum and long run reversals.

The investor overconfidence can be explained in a manner synonymous with the figure (Fig 1) . The figure below explains how a trader might trade, based on the confirming public information , when at a hint of a earlier private signal , might find his confidence level increasing, which in turn is directly proportional to the expected  price of the stock portfolio .The same is applicable to a disconfirming piece of  news, as the confidence level decreases and the opposite happens. Momentum in price of stocks continues as indicated by the dotted lined due to continued overreaction and will eventually smooth down, putting the price back at the fundamental levels, at the consequent arrival of public information .

Hong and Stien (1999) have also argued their cause by showing how the investors are categorised into two groups of mainly the ‘news watchers’ and ‘momentum traders’. Neither of them are rational and their processing of public information is partly in subsets and not comprehensive. Any private signal that is out, would be closely monitored by the ‘newswatchers’ to make predictions about the future fundamental prices. The forecasts made will be not be dependent on either the current or the past prices. However ‘momentum traders on the other hand, will be function of the past prices . Yet again they come to a assumption that news watchers are the only ones active , with the stock prices having adjusted slowly .As a result a under-reaction is created rather than an a overreaction, based on the clear notion that ‘news watchers’ are  not extracting any positive information from the prices. The two groups work in hand for a simple two part strategy that is witnessed when a bulk of profits is made earlier on the “momentum cycle’’, after a sufficient piece of news has been assimilated by the ‘news watchers’, and then as time progresses , the money is lost in the later cycle. 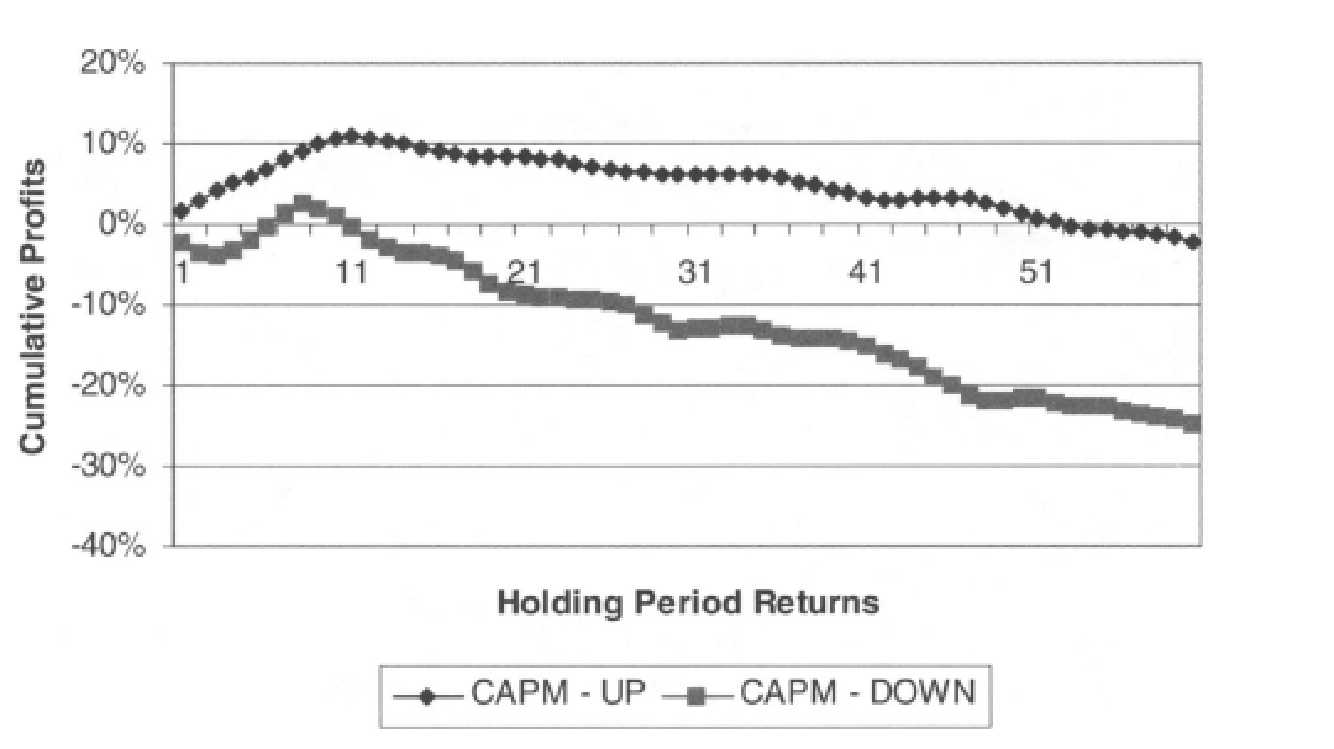 Cooper et al have complemented the findings of Hong et al in analysing that, as risk aversion decreases , a greater overreaction occurs which cause the momentum profits to increase .The profits however are due to an overreaction to the news, then in the long term we can expect a long run reversal in profits and as it goes further down the time scale , the market corrects itself .The short term momentum due to the six month strategy and a five year holding period employed by Jagadeesh and Titman(2001) shows the profits reversing after years two to five years , which succeeds the overreaction and its subsequent correction.

The above  figures  plot cumulative raw and CAPM profits against the past six months holding strategy following the UP and DOWN market states. When a lagged three year market return is not  negative ,then the market is in UP state and vice versa for the DOWN state . The plots of UP market ie of the raw and CAPM profits are in consensus with Jagadeesh et al(1998) who suggest that early momentum profits are counterbalanced by the long run reversals. An another significant indication is that long run reversal in the raw and CAPM adjusted profits plots , despite the lack of any initial momentum . Cooper et al state that average Raw and CAPM adjusted profits during months 13 to 60 in the down states are significantly negative at -0.67% and -0.52 respectively, which implies that even without the presence of any short run momentum , long term reversal can take place.

From an international perspective, Rouwenhorst pointed out momentum in stocks and reversals are not confined to home stock exchanges but also in stock portfolios held by investors across the world. One of the conclusions was that of a when an internationally diversified portfolio of medium strength, past winners and past losers has an positive earnings of approximately 1 percent per month. The sample of stocks varied across 12 different stock exchanges across the world in the time period of 1978 to 1995 .The significance in this scenario as in different from the Jagadeesh et al (1998) model is the wider scope of perspective while analysing the momentum. An interesting aspect to take note that is that returns are stronger for smaller firms than the  bigger firms .This factor of outperformance is not measured in terms of any conventional factors of risk but that of a abstract momentum factor of its won . As most of the stocks are European based , the similarity of it with the US based stocks is a common theme, and relates to the exposure of a common factor behind the profitability of momentum strategies. 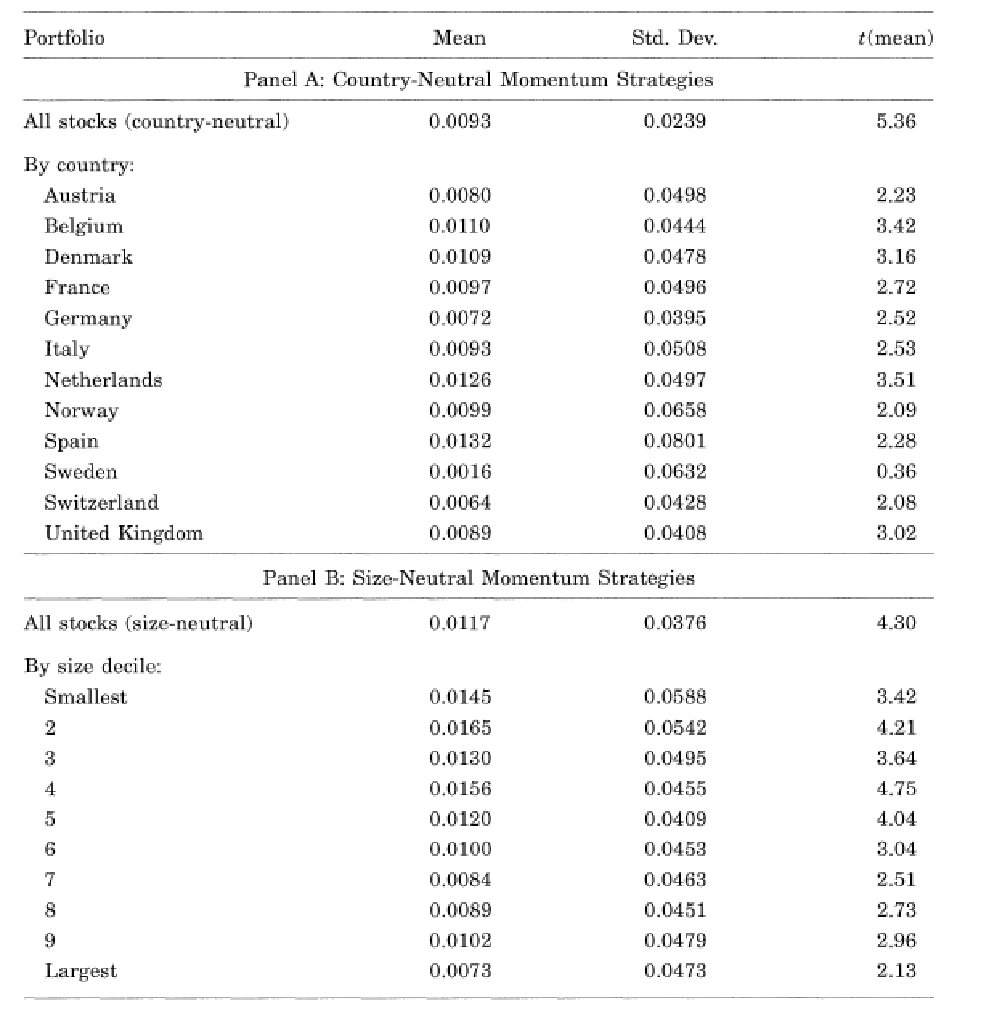 The above table describes the country wise performance of stocks , when ranked into deciles, the top 10 percent containing the winner portfolio and the bottom the loser portfolio. A country wise decomposition of stocks , reduces the average return , in  relatively smaller terms, when winners over losers are compared . Thus country based momentum is trivial in explaining the continual performance of stocks. The diversification of portfolio lowers the standard deviation of winner and loser portfolios by a margin of 0.18. As a result the significance of mean excessive return increases.

Most of the countries have  a t –statistic that exceeds 2 excepting Sweden. A large portion of the winner – loser strategy  excess return in fact country specific and therefore any continuation is not due to country wise momentum , rather it is spread across a wide range of market portfolios.

Due to the belief in behavioural bias as a basis for price momentum, proponents of this theory believe that psychology, rather than logic is the main determinant of investor behaviour.  Examples of the October 1987, stock market crash and the internet ‘bubble’ of the late 1990’s are seen by behaviouralists as evidence of investor irrationality.

The existence of the stock market returns means that we would always be interested in how people trade and how efficient the markets can be. These two financial phenomenon in combination try to explain how the stock markets work, though both     as separate theories have great differences. By and large we have come to realise that the markets are not as efficient as the hypothesis seeks to believe and the current trend is for price momentum to offer a better explanation of stock markets and investor behaviour.