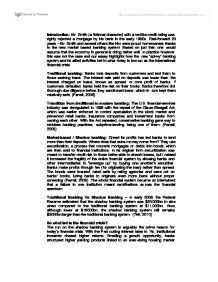 Introduction: Mr. Smith (a fictional character) with a terrible credit rating was righty rejected a mortgage by his bank in the early 1980s. Fast-forward 20 years - Mr. Smith and several others like him were proud homeowners thanks to the new market based banking system. Based on just that, one would assume that the economy in general is doing rather well. In practice however this was not the case and our essay highlights how the new 'spivvy' banking system and its allied activities led to what today is known as the international financial crisis. Traditional banking: Banks took deposits from customers and lent them to those seeking loans. The interest rate paid on deposits was lower than the interest charged on loans, known as spread or core profit of banks. If customers defaulted, banks held the risk on their books. Banks therefore did thorough due diligence before they sanctioned loans, which in turn kept them relatively safe. (Farrell, 2008) Transition from traditional to modern banking: The U.S. financial-services industry was deregulated in 1999 with the repeal of the Glass-Steagall Act, which was earlier enforced to control speculation in the stock market and prevented retail banks, insurance companies and investment banks from owning each other. With the Act repealed, conservative banking gave way to reckless banking practices, subprime-lending being one of them. (Farrell, 2008) Market-based / Shadow banking: Greed for profits has led banks to lend more than their deposits. Where does that extra money come from? They use securitization, a process that converts mortgages or debts into bonds, which are then sold to financial institutions. In its original form securitization was meant to transfer credit risk to those better able to absorb losses, but instead it increased the fragility of the entire financial system by allowing banks and other intermediaries to "leverage up" by buying one another's securities. ...read more.

every possible down turn causes much more negative impact to the market. This implies the very factor that makes the capital market liquid affects adversely in the time of crisis. Essential feature of diminishing flows throughout the current financial crisis has been due to the shock of risk aversion, as confidence of investors reduced due to concerns in regard to the quality of financial assets and the solvency of major banks. Thus in a globalized world an impact of risk aversion for a specific country is subjected to the magnitude and nature of its transnational financial links, its macroeconomic environment, and its reliance on world trade (Milesi-Ferreti, 2007). Concentration of economic power and arbitrage: Due to the a large amount of capital creation and foreign exchange reserves in some parts of the world, there exists a privilege to control the capital flow around the world and concentrate the process of wealth creation. Significant feature of globalization in relation to capital flows resulting in financial crisis is illustrated in developed economies value of both external assets and liabilities, as they rose considerably at a faster pace than the emerging markets (Lane and Milesi-Ferretti, 2007). This tendency was also supplemented with the growth in flows for regulatory arbitrage purposes through international financial centres large and small, by transacting substantial shares in cross border capital movements (Milesi-Ferreti, 2007). In adverse it had also led to regulators creating strict Foreign Direct Investment regulations as preventative measure to crisis. Reckless Lending and Volatility: As discussed above capital if kept unutilised leading to a deprecated in value. This creates a pressure to invest surplus capital in order to achieve required returns on the capital. ...read more.

One of the problems which suspected for financial crisis is that it creates one way feedback loops which concentrates market momentum only in one direction which eventually causes a lot of trouble because no one else is willing to take the other side. Although there is major dark in the technology regulators keep maximizing trade with it due to transactional speed efficiency rather than looking at the true market efficiency. Therefore here the technology being efficient and productive ignores fact that it could be very destructive and it did contribute for the both financial crisis and "flash crash". Flash crash can be considered as the spark that exploded the tinderbox of automated indexed markets which rapidly executed a 4.1$bn sale of stock index by the automated traders. This event caused $1000bn off the values of us shares for a period of several minutes. (Michael Mackenzie and Aline, 2010). Conclusion: The intrusion of shadowy banking system clouding over traditional practices creating a massive surpluses of wealth being traded unnoticed or benefiting a certain few questions the ethical values of business. Free mobility of capital in the International markets in a more complex globalized world has astounded liberal thinkers, causing a reversal flow of money from the rich in developing economies to the safe havens of developed economies for security. Complex automated algorithmic functions being run by computers has been left unchecked, resulting in chaos and delaying the time interval for a human solution to the problem. These practices need to be changed since the global economy has not recovered completely from the ongoing financial crisis and steps have to be taken to prevent the ongoing recession. Market based banking needs to be strictly regulated by the government and new technologies need to be tested and monitored for a much extended period of time before putting into the real time scenario is our suggestion. ...read more.