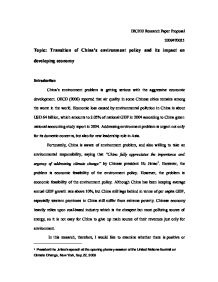 IRC010 Research Paper Proposal 2009470055 Topic: Transition of China's environment policy and its impact on developing economy Introduction China's environment problem is getting serious with the aggressive economic development. OECD (2006) reported that air quality in some Chinese cities remains among the worst in the world. Economic loss caused by environmental pollution in China is about USD 64 billion, which amounts to 3.05% of national GDP in 2004 according to China green national accounting study report in 2004. Addressing environment problem is urgent not only for its domestic concerns, but also for new leadership role in Asia. Fortunately, China is aware of environment problem, and also willing to take an environmental responsibility, saying that "China fully appreciates the importance and urgency of addressing climate change" by Chinese president Hu Jintao1. However, the problem is economic feasibility of the environment policy. However, the problem is economic feasibility of the environment policy. Although China has been keeping average annual GDP growth rate above 10%, but China still lags behind in terms of per capita GDP, especially western provinces in China still suffer from extreme poverty. ...read more.