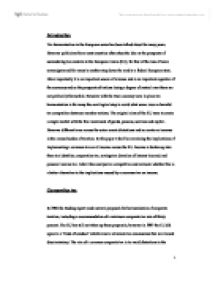 Tax harmonisation in the European union.

Introduction Tax harmonisation in the European union has been talked about for many years. However politicians from most countries often shun the idea as the prospects of surrendering tax controls to the European Union (EU), for fear of the loss of more sovereignty and for many is another step down the road to a federal European state. More importantly it is an important source of revenue and is an important regulator of the economy and so the prospects of nations losing a degree of control over them are not politically favourable. However with the Euro currency now in place tax harmonisation is for many the next logical step to avoid what some view as harmful tax competition between member nations. The original aims of the EU were to create a single market with the free movement of goods, persons, services and capital. However different taxes across the union create distortions and so create an increase in the excess burden of taxation. In this paper I shall be examining the implications of implementing a common tax on all income across the EU. Income is broken up into three tax identities, corporation tax, savings tax (taxation of interest income) and personal income tax. I shall then analyse tax competition and evaluate whether this is a better alternative to the implications caused by a common tax on income. Corporation tax In 1992 the Ruding report made several proposals for harmonisation of corporate taxation, including a recommendation of a minimum corporate tax rate of thirty percent. ...read more.

Of course if this were a paper on North America then this section would be a lot different, as migration there is relatively high and more efficient than in the EU. Personal income tax is very different across the EU however there is little migration across member nations. There is a small amount of migration with people who are highly educated and can probably speak different languages. This is one of the main barriers to people migrating, there are many different languages and cultures across Europe making it very difficult for people to migrate therefore the costs of migrating out way any small benefits of lower taxes. There are of course many other factors making labour immobile, the potential loss of friends and family, differences in public services for example Sweden obviously has better public services than Greece. This means that tax competition is unlikely to take place here and also helps contribute to the fact that Labour is relatively inelastic which means it is efficient to tax according to the guiding principles of the Ramsey tax problem. As in the medium term it is unlikely much labour mobility will occur national governments can tax at will and reap in the tax revenues for the country. However this leads to another argument. There is a lot of debate in the literature on optimal taxation, is it is more efficient, or is there less dead-weight loss created on the economy if tax on personal income is small and should be shifted on to indirect taxation such as consumption tax as recommended by Hyman. ...read more.

It could keep down taxes in the EU, which is thought to be to high anyway. Since the treaty of Rome in 1965 taxes have risen significantly so the common market has not created sufficient competition. Even with the mass globalisation occurring taxes have still been rising even since 1990 especially in Germany, France and Italy. With the introduction of monetary union however this may change and a few rounds of tax competition may not be an adverse event for the EU, as it would force governments to be more efficient. If there was a common tax agreed upon within the EU capital and labour could still move to non-EU countries for tax reasons, as EU nations do not solely trade with one another but the rest of the world as well. It could make the EU inefficient as the rest of the worlds tax systems become more efficient whilst the EU stands still within its own agreement. Making a common tax almost impotent, therefore income tax harmonisation within the EU does not solve any possible problem. Therefore the implications of implementing a common tax on income is more inefficiencies and so dead weight loss to society. Therefore the EU should leave income tax to a more efficient approach of tax competition which will harmonise income taxes more efficiently as well as making government more efficient. The EU should also concentrate more on harmonising indirect taxation which is a more efficient tax base and try to make labour more mobile which is difficult however making wages more flexible is not. This would increase tax competition in personal income tax as well as having other benefits to the EU such as a better ability to cope with asymmetric shocks. ...read more.