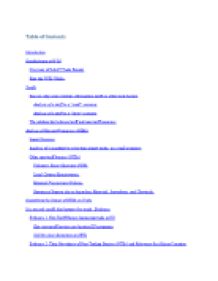 The establishment of the World Trade Organisation has led to a significant reduction in the level of tariffs applied countries member to the WTO. Nevertheless, there has been a substantial mushrooming of non-tariff measures over the last decade. The latte

﻿Table of Contents Introduction Establishment of WTO Overview of GAAT Trade Rounds How the WTO Works. Tariffs Reasons why some countries still maintain tariffs or other trade barriers Analysis of a tariff in a "small" economy Analysis of a tariff in a "large" economy The relationship between tariff and non-tariff measures Analysis of Non-tariff measures (NTMs) Import Licenses Analysis of a quantitative restriction-import quota- in a small economy. Other non-tariff barriers (NTBs) Voluntary Export Restraint (VER): Local Content Requirements: National Procurement Policies: Banning of Imports due to hazardous Materials, Ingredients, and Chemicals. Quantifying the Impact of NTMs on Trade It is not only tariffs that hamper free trade: Evidences Evidence 1: Non Tariff Bariers hampering trade in EU How non-tariff barriers are hurting EU companies Call for clear distinction on NBTs Evidence 2: Their Prevalence of Non-Trading Barriers (NTBs) and Relevance for African Countries Evidence 3: Non-Tariff Measures Affecting EU Exports Prevalence of non-tariff measures Conclusion Appendix References Introduction The WTO came into being in 1995, replacing the General Agreement on Tariffs and Trade (GATT). GATT was created in 1947, one of the post-second world war institutions for international governance. The United Nations, the International Monetary Fund (IMF) and World Bank were the other institutions created in the 1940s, as world leaders at the time believed that if international institutions had existed that were capable of responding to the economic and social crises of the 1930s, it would have been possible to prevent the international climate from deteriorating to the point of war. In the 1930s, many countries had imposed arbitrary and increasingly high and discriminatory trade barriers in an attempt to hold the effects of economic depression out of their countries by keeping domestic industries alive and thus maintain domestic employment. But in fact this protectionism (protection of domestic producers at the expense of imports and global welfare) caused the effects of economic depression to spread all over the world. ...read more.

= b + d ? e Hence the decline in welfare in U.S. is indeed the algebraic sum of two different terms, the production and consumption distortion loss (b + d), and, the TOT improvement (rectangle e). If the TOT improvement for the U.S. is large enough to outweigh the efficiency losses, then the U.S. is indeed better off at the cost of making Mexico worse off! Of course, if e < b + d, then the U.S welfare falls as well. In Mexico the only change is the lower TOT (the equivalent area of "e" in the graph for Mexico) and that only makes the economy of that country worse off! The tariff by the U.S. has indeed been laid partially on the shoulders of their trade partner. As both U.S. and Mexico are major partners of each other in trade, a lower import demand for clothing by the U.S due to tariff will indeed lower the price of this good for Mexico. This type of policy, on that hurts your trading partner, is called "beggar-thy-neighbor" policy. It upsets the relationship between a country and its trade partner and leads to retaliation by the hurt party. What are the income distribution effects of tariff by the U.S.? These are similar to the previous section. In the U.S., due to Stolper- Samuelson effect, the real income of labor (the scarce factor used intensively in clothing production in the U.S.) rises while that of capital falls. The opposite is true for Mexico where labor loses and capital gains. Note the overall world welfare effect of a tariff: it is always negative! Even if U.S. makes itself better off, at the cost of its neighbor, the net world welfare change is b + d which represent loss of efficiency in the U.S. The relationship between tariff and non-tariff measures As tariffs have generally been subject to more stringent WTO disciplines and reduction commitments than NTMs, some observers have worried that countries might be tempted to replace declining tariff by more non-tariff protection. ...read more.

The EU gets the go-ahead to impose $4bn in sanctions against the US, the highest damages ever awarded by the WTO. 2002 September - Former Thai deputy Prime Minister Supachai Panitchpakdi begins a three-year term as director-general. He is the first WTO head to come from a developing nation. 2003 September - WTO announces deal aimed at giving developing countries access to cheap medicines, hailing it as historic. Aid agencies express disappointment at the deal. 2003 September - World trade talks in Cancun, Mexico collapse after four days of wrangling over farm subsidies, access to markets. Rich countries abandon plans to include so-called "Singapore issues" of investment, competition policy and public procurement in trade talks. 2003 December - WTO rules that duties imposed by the US on imported steel are illegal. US President Bush repeals the tariffs to avoid a trade war with the EU. 2004 April - WTO rules that US subsidies to its cotton farmers are unfair. 2004 August - Geneva talks achieve framework agreement on opening up global trade. US and EU will reduce agricultural subsidies, while developing nations will cut tariffs on manufactured goods. 2005 March - Upholding a complaint from Brazil, WTO rules that US subsidies to its cotton farmers are illegal. 2005 May - WTO agrees to start membership talks with Iran. 2005 September - Frenchman Pascal Lamy takes over as WTO director-general. He was formerly the EU's trade commissioner. 2005 October - US offers to make big cuts in agricultural subsidies if other countries, notably EU do the same. EU responds, but France opposes more concessions. 2005 November - WTO approves membership for Saudi Arabia. 2005 December - World trade talks in Hong Kong begin amid widespread belief that they will not succeed in making a breakthrough. 2007 July - US "fast track" authority expires in Congress. Under this provision Congress waives the right to amend any trade deals negotiated by the US President. Many experts believe Congress will not renew this provision, setting a deadline for reaching a trade deal. ...read more.