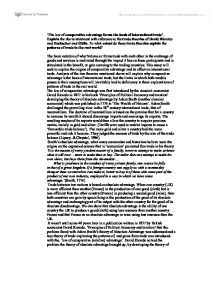 The law of comparative advantage forms the basis of international trade. Explain the above statement with reference to the trade theories of David Ricardo and Heckscher and Ohlin. To what extent do these trade theories explain the patterns of trad

'The law of comparative advantage forms the basis of international trade'. Explain the above statement with reference to the trade theories of David Ricardo and Heckscher and Ohlin. To what extent do these trade theories explain the patterns of trade in the real world? The basic notation of why Nations or Firms trade with each other in the exchange of goods and services is motivated through the impact it has on these participants and is stimulated in the benefit, or gain accruing to the trading countries. This essay will seek to explain the origins of comparative advantage and its effect on international trade. Analysis of the two theories mentioned above will explain why comparative advantage is the basis of international trade, but the limits in which both models posses in their assumptions will inevitably lead to deficiency in there explanations of patterns of trade in the real world. The law of comparative advantage was first introduced by the classical economist David Ricardo in 1817 in his book 'Principles of Political Economy and taxation' developing the theory of absolute advantage by Adam Smith (another classical economist) ...read more.

The differences between absolute and comparative advantage theories are faint. Absolute advantage looks at absolute productivity differences, comparative advantage looks at relative productivity differences. Take the UK and France again as examples, this time UK is better than France at producing both products cloth and wine, using only one factor of production, labour. UK produces 6 cloths for every 4 bottles of wine, and France produces 5 cloths for every 1 bottle of wine. Absolute advantage suggests that no trade should occur, because the UK is more productive than France in producing both goods. The theory of comparative advantage on the other hand, suggests that trade should still occur, as the UK is comparatively better than France in wine production, and France is comparatively better than the UK in the production of cloths therefore creating a basis for mutually beneficial trade, unless the absolute disadvantage that one country as with respect to other country is in the same proportion for both goods. Ricardo's principle of comparative advantage is based on several assumptions, There are only two countries and two goods, with free trade between the two participates with, perfect mobility of labour within each country but completely immobile between the two countries. ...read more.

This is not accepted as factor prices are not set in a perfect market. There are such factors to consider such as legislated minimum wages and benefits which force the cost of labour to rise to a point greater than the value of the product than many workers can produce (Ball, McCulloch, 1999). Many economists attempted to disprove the Heckscher-Ohlin theory. The most notable effort was by a man named Wassily Leontief. His paradox was self named (Leontief Paradox) and disputed the theory as a predictor of the direction of trade. This paradox failed to empirically validate the country based Heckschler-Ohlin theory (Mankiw, 1997). The H-O theory extends our trade model to explain the basis of comparative advantage and examines the effects of international trade on the earnings of factors of production. Classical economists did not conclude these two questions. The H-O theory is also based on a number of assumptions, these being, that there are two countries, two goods and two factors of production. That both countries have the same technical ability involved in the production process. Each of the goods has the same factor intensity either being labour intensive or capital intensive. Factors are free to move domestically with no obstacles to free international trade (tariffs, transport costs). ...read more.