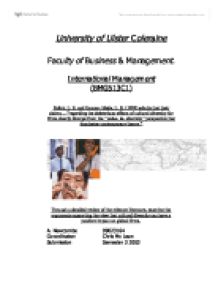 Through a detailed review of the relevant literature, examine the arguments supporting the view that cultural diversity can have a positive impact on global firms.

University of Ulster Coleraine Faculty of Business & Management. International Management (BMG513C1) Pailch, L. E. and Gomez- Mejia, L. R. (1999) admits that their claims ..."regarding the deleterious effects of cultural diversity for firms clearly diverge from the "value- in- diversity" perspective that dominates contemporary theory." Through a detailed review of the relevant literature, examine the arguments supporting the view that cultural diversity can have a positive impact on global firms. A. Newcombe 99023164 Co-ordinator: Chris Mc Lean Submission Semester 3 2003 Pearse Hutchinson has written ...'Labhraim le str�ins�ir�, creidim gur ch�ir bheith ag labhairt le str�ins�ir�:' I speak with strangers, I believe that it's right to be speaking with strangers'. <DATE UNKNOWN> Introduction. A thorough and detailed literature review has revealed many arguments which support the view that cultural diversity can have a positive effect on global firms. The effects of cultural diversity are very powerful and complex. But what is Cultural diversity? Firstly, according to Hofstede, (1980), culture is: 'the collective programming of the mind which distinguishes the members of one human group from another.' This implies that 'culture' is a learned group system, such as language, daily living habits, social interaction, religious observance, law and justice etc, (Burke, E. 2001). It is these learned behaviours which distinguish one community from another and constitute the shared basis of social action, transmitted and reinforced by members of that group (Burke, 2001; Hall 1976; Hofstede, 1980, Adler, 2002). Secondly, 'cultural diversity' Cox (1993) defines this as the 'representation, in one social system, of people with distinctly different group affiliations of cultural significance.' To identify and measure the effects of diversity it is necessary to examine the organisations culture (Blank & Slipp, 1994.). Research on intercultural effectiveness has been undertaken from a variety of perspectives and methodologies. More recent work has adapted empirical approaches to examining cross-cultural effectiveness (see reviews by Black and Mendenhall, 1990; Hammer, 1989, 1984; Imahori and Lanigan, 1989; Benson 1978, Hammer, Gudykunst and Wiseman, 1978; as cited in Clarke & Hammer, April 1995). ...read more.

For Aerospace the most important element was nurturing cultural values internally, in terms of working practices and cultures, so to gain valuable knowledge and experience. Technology and Communication. '... new technology will lead to healthier lives, greater social freedom, increased knowledge and more productive livelihoods...' (UNDP 2001). The global economy is historically new, for the simple reason that only in the last two decades have we produced the technological infrastructure required for it to function: telecommunications, information systems, micro-electronic-based manufacturing and processing, information-based air transportation, container cargo transport, high speed trains, and international business services located around the world (Castells, 1998). Much of the public opinion has been fuelled by the availability of ICT and the rapid transparency of ideas and events around the world that is itself one of the benefits of globalisation (Segal-Horn, 2002). Technological change and development operates across boarders and has no geographic boundaries. It is probably one of the strongest drivers of globalisation. Entire industries have been created e.g. mobile phones. Technological development may also transform traditional industries such as financial services e.g. selling insurance policies or bank loans over the Internet (Segal-Horn, 2002; Hermel, 1999). The emerging global information society is characterized by positive features: there will be, better education, more information and diversity of culture. New digital technologies create more choice for people in education, shopping, entertainment, news media and travel. (Castells, 1998). Another recent development which has helped millions is the globalisation of knowledge through information technology. One result is the Ugandan doctor who can better care for the health of his patients because he now has free access, via the Internet, to the latest medical journals. The rate of technological change in specific industries is also observed to influence the decision to pursue a global standardization strategy (Samiee et al 1992). The flexibility of this global economy allows the overall system to link up everything that is valuable according to dominant values and interests, (Castells, 1998), the global information economy is based less on the ...read more.

It is created and shaped by the choices and decisions of us all. But it is easy to see why it can seem so overwhelming. If a global culture exists, it is because people see that it has benefits and have made a conscious decision to choose it. We possess both a wealth of culture and history, of which we are all proud. Our cultural heritage has, over the years, shaped our societies and influenced our standards. Our cultures have also played their part in both the UK and Russia developing, as recognised powerful trading nations. As we all know, St Petersburg was founded by Peter the Great who wanted the city to become Russia's "window on the west". His vision of a modern Russia integrated with the rest of Europe is alive today (Baroness Symons, 2002). There are many very positive things about globalisation. We are all enriched, and our cultures are enriched, by contact with other cultures. Positive features of globalisation depend on there being a diversity of cultures. "Instead of allowing diversity of race and culture to become a limiting factor in human exchange and development, we must refocus our understanding, discern in such diversity the potential for mutual enrichment, and realise that it is the interchange between the great traditions of human spirituality that offers the best prospect for the persistence of the human spirit itself. For too long such diversity has been treated as threat rather than gift. And too often that threat has been expressed in racial contempt and conflict, in exclusion, discrimination and tolerance". In this declaration entitled 'Tolerance and Diversity: A Vision for the 21st Century', Mary Robinson and Nelson Mandela emphasised the importance of the unique opportunity and challenge which multiculturalism offers civil society (Burke, E. 2001). 144 nations came together at Doha - promoting peace through trade. Providing international and economic stability. In my opinion that the following statement is the strongest of all and indisputable: "We knew that in the shadow of the 11 September attacks, we had to demonstrate that trade could unite the World" (Baroness Symons, 15th April 2002). ...read more.