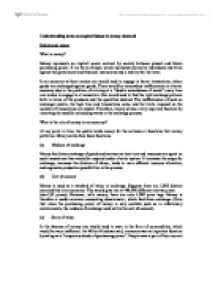 Understanding some conceptual issues in money demand Definitional issues What is money? Money represents an implicit social contract by society between present and future purchasing power. It is a form of asset, which represents claims by individuals and firms against the government and financial institutions and a liability for the latter. In an economy without money one would need to engage in barter transactions, where goods are exchanged against goods. There would be tremendous inefficiencies in a barter economy due to the problem of arriving at a "double coincidence of wants" every time one wishes to engage in a transaction. One would need to find the right exchange partners both in terms of the products and the quantities desired. The inefficiencies of such an exchange system, the high time and transactions costs, and the limits imposed on the number of transactions are evident. Therefore, money serves a very important function by removing the need for coinciding wants in the exchange process. What is the role of money in an economy? At any point in time, the public holds money for the services or functions that money performs. Money serves four basic functions. (a) Medium of exchange Money facilitates exchange of goods and services as less time and resources are spent on such transactions than would be required under a barter system. It increases the scope for exchange, increases the division of labour, leads to more efficient resource allocation, and augments production possibilities in the process. (b) Unit of account Money is used as a standard of value in exchange. Suppose there are 1,000 distinct commodities in an economy. This would give rise to 499,500 different relative prices (n(n-1)/2 prices). However, with money, there are only 1,000 price tags. Money is therefore a useful common accounting denominator, which facilitates exchange. (Note that when the purchasing power of money is very unstable such as in inflationary environments, the medium of exchange need not be the unit of account). ...read more.

The velocity of narrow money is found to be higher than that for broad money. Also, there has been a notable downward trend in the velocity of broad money. There is also quite a large divergence between the velocities of broad and narrow money. Empirical evidence from the Indian studies lead to the following broad conclusions. Velocity appears to be affected by three sets of institutional factors. These are the degree of monetisation, which has a negative effect on velocity, the degree of financial sophistication, which tends to raise velocity through increased substitution of money with other assets, and the degree of economic stability, which raises the velocity of money by lowering precautionary demand for money. Overall, the studies indicate that the velocity of broad money in India is very predictable and in conformity with expectations. Prior information on real income, the interest rate, monetisation, financial sophistication explain most of the variation in velocity. 1 The speculative component of the money demand equation is Keynes' contribution to linking the real and financial sectors of the economy and overcoming the classical dichotomy. By creating a broader money demand function, Keynes created a link between the goods and the money markets, through the interest rate. In the classical view. only the transactions demand for money was present. 2 The classical system uses the equation of exchange as a theory of price determination. The number of physical transactions is limited by the economy's potential to produce. Then if the velocity and real output are stable, prices are determined by the stock of money. 3 The degree of financial innovation and development of the capital markets is important in determining not only transactions costs of money management but also in determining the significance of interest rates. When capital markets are well developed, interest rates reflect expectations of inflation. When financial markets are regulated, the interest rate may not pick up expectations that clearly. 4 These include Vasudevan (1977), Biswas (1962), Sastry (1962), Gujarati (1968), Gupta (1970), and Singh (1970) among others. ...read more.