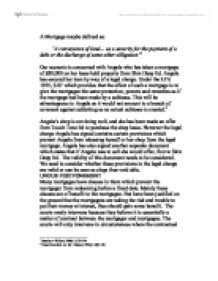 A Mortgage maybe defined as: "A conveyance of land... as a security for the payment of a debt or the discharge of some other obligation"1 Our scenario is concerned with Angela who has taken a mortgage of �80,000 on her lease held property from Skin Deep ltd. Angela has secured her loan by way of a legal charge. Under the LPA 1925, S.87 which provides that the effect of such a mortgage is to give the mortgagee the same protection, powers and remedies as if the mortgage had been made by a sublease. This will be advantageous to Angela as it would not amount to a breach of covenant against subletting as no actual sublease is created.2 Angela's shop is not doing well, and she has been made an offer from Touch Tone ltd to purchase the shop lease. However the legal charge Angela has signed contains certain provisions which prevent Angela from releasing herself or her shop from the legal mortgage. Angela has also signed another separate document which states that if Angela was to sell she would offer, first to Skin Deep ltd. The validity of this document needs to be considered. We need to consider whether these provisions in the legal charge are valid or can be seen as clogs thus void able. UNDUE POSTPONEMENT Many mortgages have clauses in them which prevent the mortgagor from redeeming before a fixed date. Mainly these clauses are of benefit to the mortgagee. But have been justified on the ground that the mortgagees are taking the risk and trouble to put their money at interest, thus should gain some benefit. ...read more.

advantage. Originally the courts view on such collateral advantages taken by the lender were void. This was they were regarded as a disguised form of interest contravening the usury laws (Jennings v Ward)10. In 1854, the last of the statutes dealing with usury was repealed and there after the courts attitudes to collateral advantage began to change. Today the current law on equity is far different. Equity will not intervene and prevent a lender from stipulating for a collateral advantage. The law on collateral advantage can be summarised in the following propositions. Firstly a collateral advantage which exists until redemption can be valid (Biggs v Hoddinott), but will be void if it is oppressive or unconscionable (city land & property holdings ltd v Dabrah). A collateral advantage which exists beyond redemption is void. (Noakes & co ltd v Rice). Unless it is an independent transaction (krelinger V new Patagonia Meat & Cold storage co ltd). In Noakes V Rice11 the respondent bought a lease of a public house from the appellants who were brewers. This was with the help of a loan from the appellants, which was secured on a mortgage of the premises. The respondents covenanted, inter alia, that he and all persons deriving title under him would not, during the term of the lease, whether any money was or was not owning to the appellants under the mortgage loan, use or sell any malt liquors, except that from the appellants. Some time later the respondent wished to repay the loan and redeem the property free of the covenant. ...read more.