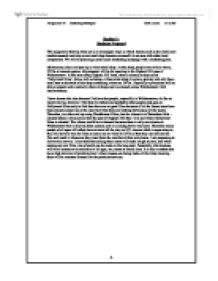 Section 2: Business Proposal The assignment that has been set is to investigate ways in which factors such as the media and market research can help a new retail shop become successful in an area with other local competition. We will be planning a small-scale marketing campaign with a marketing plan. My business idea is to open up a video rental shop. At this shop, people rent or buy videos, DVDs or console games. My proposal will be for opening in the Higham Hill area of Walthamstow. In this area along Higham Hill Road, there is already a shop called 'Hollywood Nites', but as well as being a video rental shop it is also a grocery and only has a small area at the back of the shop containing videos an DVDs. Hopefully my business will be able to expand and eventually chain of shops can be situated across Walthamstow with similar themes. I have chosen this idea because I believe that people, especially in Walthamstow, do like to watch movies, however I find that my father (and probably other people too) goes to Hollywood Nites only to find that there are no good films because all of the decent ones have been already rented out or the cant find what they are looking for because of the layout. Therefore, we often end up using Blockbuster Video, but the closest is in Tottenham Hale - situated about 2 miles away from the part of Higham Hill that I live and where Hollywood Nites is situated. The videos would be in demand because there is only one cinema in Walthamstow but it only has three screens and it is closing down very soon. Therefore many people of all ages will either have to travel all the way to UCI cinema which is ages away or they will have to wait for films to come out on video or DVD so that they can rent out the film and watch it whenever they want from the comfort of their own home. ...read more.

There is the opportunity for me to enter the market place because people don't like to have to go too far for products/services of this type. Therefore where I position my business, I should get people from the local area coming to my outlet rather than others slightly further away. One reason for this is because film rentals and sales are not always planned, but are also sometimes made on impulse. Also, brand names (carrying reputation) should not be much of a disadvantage to my new business because the customers will know that neither my business nor my competition creates their own products (DVDs, videos or games) but get them from the same place - the film producing companies such as 'Paramount' and 'Twentieth Century Fox'. Therefore, as long as the price is similar, where the customers get their products/services from should not put them off business they know less about. The possible idea of delivering DVDs by post also adds to the convenience customers can receive. As I found out in the questionnaire that I did, people generally return to film rental outlets multiple times within months. One unique method of rental distribution that I could use to position my service into the market is that the customer could pay a certain amount (either in-store or over the phone using a credit card) annually, then once (or twice) per month the number one DVD film in the charts at that time could be sent to the customer by post - to be returned within 4 or 5 days, either by post again or in-store. This would only work for DVDs because as I have tested, videos (whilst in their cases) will not fit through most letterboxes. Apart from this, positioning my service/products in the market soon after the initial opening is severely limited by my funds and the nature of the product. Eventually, in years to come, other ideas can come to practice that will increase my share in the market, which require more funds. ...read more.

The internet is also becoming a more popular site for businesses to place adverts. It has the advantage that a lot of information can be placed on the web site and in some cases an order for the products can be placed at the same time. This may not be expensive to set up, but it is limited in that only people who have a computer and are linked up to the internet can see the advert. The people seeing the advert may live in other countries and therefore may not be able to buy the product anyway. This will affect my choices of advertising/promotion because my business will only be small and only target people living locally to Higham Hill. There is also the fact that the size of my business and the fact that my business is new will limit the funds I have to spend on advertising and promotion. Basically, each form of promotion has advantages and disadvantages:- Type Advantages Disadvantages Television Can reach millions of people all over the world Very expensive Radio Cheaper than T.V, can be used to reach certain listeners Sound only, smaller audiences Newspapers/Magazines A lot of information is known about the readers Often not in colour, are static and silent Posters/Billboard High visual impact for a long time and will be seen by a lot of different people Are only seen for a few seconds by drivers and are vulnerable to weather and graffiti Cinemas Very high visual and sound effect, captive audience Are relatively expensive and have limited viewers Leaflets/Junk mail Cheap to produce and distribute Are easy to ignore Internet Sites High visual impact, interactive and can link directly to buying the product There is a lot of competition so getting peoples attention may be difficult For my promotion section, one of the forms of promotion that I will use is an advert in the local newspaper. This is because it will allow me to inform ?? ?? ?? ?? Assignment 4:- Marketing Strategies Mark Linton 11 Dolb� Mark Mark Linton 11 Dolb Mark Mark Linton 11 Dolb -2- ...read more.