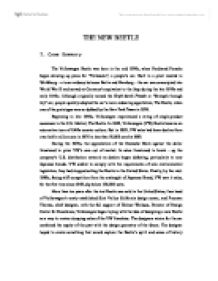 The Volkswagen Beetle was born in the mid 1930s, when Ferdinand Porsche began drawing up plans for “Volksauto”, a people’s car. Built in a plant located in Wolfsburg – a town midway between Berlin and Hamburg – the car was conscripted into World War II and served as Germany’s equivalent to the Jeep during the late 1930s and early 1940s. Although originally named the Kraft durch Freude or “Strength through Joy” car, people quickly adopted the car’s more endearing appellation, The Beetle, when one of the prototypes was so dubbed by the New York Times in 1938.

During the 1970s, the appreciation of the Deutsche Mark against the dollar threatened to price VW’s cars out of market. In sales threatened to break – up the company’s U.S. distribution network as dealers began defecting, particularly to new Japanese brands. VW unable to comply with the requirements of new environmental legistation, they had stopped selling the Beetle in the United States. Finally, by the mid-1980s, facing stiff competition from the onslaught of Japanese Brand, VW saw it sales, for the first time since 1958, dip below 100,000 units.

More than ten years after the last Beetle was sold in the United States, then head of Volkswagen’s newly established Simi Valley California design center, and Freeman Thomas, chief designer, with the full support of Helmut Warkuss, Director of Design Center for Excellence, Volkswagen began toying with the idea of designing a new Beetle as a way to revive slumping sales of the VW franchise. The designers vision for the car combined the equity of the past with the design geometry of the future. The designer hoped to create something that would capture the Beetle’s spirit and sense of history while still being a distinctively new model for the 1990s. Trying to reflect the Beetle philosophy – honest, simple, reliable, and original – for the new concept.

In fall of 1994, VW’s marketing team including Waterhaouse and Keyes met to discuss the lackluster performance in the U.S. market and began laying out a “strategic recovery” plan to reinvigorate the Volkswagen franchise. One of the most significant changes VW made was hiring a new advertising agency. VW ended its 35 – year relationship with DDB Needham, one of Madison Avenue’s most prominent agencies. They hiring a small Boston – based firm, Arnold Communications.

The task for Arnold was how to make the Volkswagen brand important again and relevant to the ‘90s car buyer. The heritage of German engineering and the car’s more fun, pleasureable driving experience were powerful strengths of the brand. Their weakness was continuous marketing efforts, the brand image had been slowly eroding, and there was a perception in the minds of consumers of poor quality and reliability, also their weak sales had eroded confidence among their dealer organization.

Arnold team knew that if they want to reach the success, they had to define the challenge such as a target audience, positioning of their product, and develop an innovative advertising and media campaign.

To obtain a more in – depth understanding of consumers and dealer perseptions, the Arnold team made a research and conducted extensive consumers interviews, visited 95 of the top 100 dealers, and drove Volkswagen for over 50,000 miles to experience the cars for themselves.

From initial research had indicated that the New Beetle appealed to a number of different consumer segments. From standard demographic analysis, they found that Volkswagen consumers were younger, slightly more affluent, and more educated than the average car purchaser. But more interesting were the attitudes of these consumers, Volkswagen owners enjoyed a more active role in driving. They enjoyed driving on challenging winding roads, didn’t always obey speed limits, and saw the car more than just a way to get from place to place. They also had a unique attitude towards life, well – informed, more adventurous, creative, confident, self – sufficient, experimenters. Volkswagen drivers seemed to want to make and take the most out of their lives. They had targeting a single segment such as “Baby Boomers”. Once the audience had been determined, then they had to find the way to position the product.

The question was how to make the brand perceived versus the competitor, such as European brands like BMW and Mercedes and Asian brands like Toyota and Honda. Arnold team recommended a new product positioning and brand essence that would become the foundation for the “Drivers Wanted” campaign. The brand essence statement captured the rational and emotional benefits that provided to consumers.

The rational benefit of Volkswagen was that it was the only brand that offered the benefits of German engineering affordably. Emotionally, the car represented a completely different driving experience – more connected to the road – and a different way of living – more connected to the world. So they positioning the product not only what VW wanted to stand for about also what we did not want to stand for. For example, The Volkswagen brand to be invitational and approachable not exclusionary like some of the European car brands.

As part of the analysis in determining a target market and product positioning, the VW marketing team also had to assess the New Beetle’s pricing and competitive place on the market. While VW had yet to define the New Beetle’s competition, the car’s size would automatically place it into this segment. Domestic brands, such as Chevrolet’s, Cavalier, Ford Escort, and Saturn, cumulatively sold over one – third of the segment’s cars and would be the New Beetle’s immediate competitive set. Japanese car manufacturers Toyota and Nissan were also contenders in the category with their Corolla and Sentra models that combined, held a 15,4% market share.

In fact, pricing had been a debate since the car began its engineering overhaul and adopted more of the Golf platform. The VW team realized that a premium – price strategy could be a potential issue. If the car was priced too high, consumers might trade – up into a higher priced segment of cars expanding the New Beetle competitive set. If the priced too low, the car might not be attractive enough to dealers due to lower margins and thus fall short of the company’s profitability goals.

To improve a relationship with the dealers, Volkswagen had undertaken two organizational efforts. In September 1997, the company had own its entire base of dealers to the company headquarters in Wolfsburg, Germany. In addition, the dealers were included in a company – wide training session at the Disney Institute in early spring 1998, which was designed to help Volkswagen employees understand the value of creating a total brand experience for consumers. On the heels of these efforts to build a loyalty to the franchise, the launch of the New Beetle would test the company’s relationship with its dealers. Most dealers were excited about the new car and encouraged by the number of pre – orders they had received.

“Drivers Wanted” campaign had been successful in achieving their objectives. The positive campaign and press coverage alone would not be enough to sell the New Beetle. The VW marketing team would have to decide whom to target and how to communicate the car’s benefits. Targeting the “Baby Boomers” with value proposition of “indulging in nostalgia” appeared to be the most appropriate strategy for the New Beetle. In addition to their personal history and emotional ties to the Beetle brand. But the decision was not that easy. Consumer trends among the “Baby Boomers” revealed changing preferences to larger cars, such as sedans, SUVs, and pick ups. And of course, Volkswagen had shifted its strategy, positioning the brand behind the “driveability of their cars” to target a younger generation of drivers.

Once the positioning for the car had been decided, The Volkswagen had to maximize the impact of the brand’s advertising. A target strategy would allow the company to speak to a specific audience more frequently. It is important to align target audience strategy with the creative with the creative execution, and the editorial voice of the magazine or television show – thereby creating a synergy between a medium and message. To building brand awareness among a broader customer base would be best executed with a television campaign. Another option, print advertising, would enable the New Beetle to reach a specific demographic, such as Baby Boomers, more cost effectively.