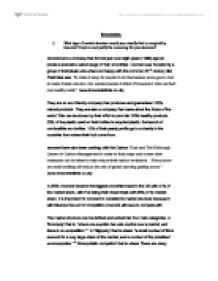 What type of market structure would you classify that is occupied by Innocent?

Economics i) What type of market structure would you classify that is occupied by Innocent? Explain and justify the reasoning for your decision? Innocent are a company that formed just over eight years (1998) ago (to produce and sell a varied range of fruit smoothies. Innocent was founded by a group of individuals who where not happy with the common 20th century diet. Their idea was: "to make it easy for people to do themselves some good. And to make it taste nice too. We wanted people to think of innocent drinks as their one healthy habit." (www.innocentdrinks.co.uk) They are an eco friendly company that produces and guarantees 100% natural products. They are also a company that cares about the future of the world. This can be shown by their effort to provide 100% healthy products, 50% of the plastic used on their bottles is recycled plastic, the launch of combustible eco bottles, 10% of their yearly profits go to a charity in the countries from where their fruit come from. Innocent have also been working with the Carbon Trust and The Edinburgh Centre for Carbon Management in order to finds ways and to see what measures can be taken to help reduce their carbon emissions. ...read more.

"The company could seek new products that have technological and/or marketing synergies with existing product lines, even though the new products themselves may appeal to a different group of customers." (Kotler, P 2000) Innocent will need to consider its market structure for their future events and consider possible influences and measures that could affect the performance of Innocents business activities. An Oligopoly market structure has a lot of advantages and benefits which can help the growth and expansion of Innocent's future. But to achieve this they must realise what is needed to survive in an Oligopoly market. For example, brand loyalty and good customer relations. As there is a lack of competition in Oligopolies it will allow Innocent to concentrate on these important factors. Innocent can use its already gained brand loyalty to use diversification as a safety net and expand into other areas of the market. Reference: * www.innocentdrinks.co.uk http://www.innocentdrinks.co.uk/us/?Page=our_story http://www.innocentdrinks.co.uk/us/?Page=our_carbon_footprint http://www.innocentdrinks.co.uk/press/?Page=press/cheatsheet * Brassington, F and Pettitt, S (2006) Principles Of Marketing (4th edn) Part 1, Pearson Education Limited 1: Page 77 2: Page 79 3: Page 79 4: Page 79 * Kotler, P (2000) Marketing Management (Millennium edn) Pretence Hall International, London, page 75 ...read more.