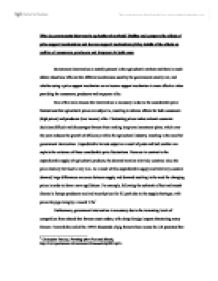 Why do governments intervene in agricultural markets? Outline and compare the effects of price support mechanisms and income support mechanisms giving details of the effects on welfare of consumers, producers and taxpayers in both cases Government intervention is notably present in the agricultural markets and there is much debate about how efficient the different mechanisms used by the government actually are, and whether using a price support mechanism or an income support mechanism is more effective when providing for consumers, producers and taxpayers alike. One of the main reasons that intervention is necessary is due to the considerable price fluctuations that agricultural prices are subject to, resulting in adverse effects for both consumers (high prices) and producers (low income) alike. Fluctuating prices makes rational economic decisions difficult and discourages farmers from making long-term investment plans, which over the years reduces the growth of efficiency within the agricultural industry, resulting in the need for government intervention. ...read more.

By paying producers a subsidy per unit produced in addition to the market price farmers are encouraged to produce more, and as a result the market price is forced down. 3 In the absence of a subsidy, market price is Pe, the equilibrium point where supply equals demand. With the introduction of a subsidy farmers now receive the price Pg and as a result output extends to Q1, which in turn results in price being paid by the consumers falling to Pm due to this additional supply. The difference between the price received by producers and the price paid by consumers represents the subsidy paid by the government per unit, which in this case is Pg - Pm. Therefore the amount covered by the taxpayers is this value times the total output. The introduction of the subsidies was brought about in order to assure farmers a fair income, which encourages them to continue producing the product and hence keeps the agricultural sector in a healthy state. ...read more.

In the summer of 2005 the EU struggled to fund the purchasing of 13.55 tonnes of grain. Where products are imported from outside the EU, high fixed prices can be maintained by imposing a tax known as the import levy, which varies depending on the threshold price set (the minimum price at which import products may be sold)6. However like the income support mechanism, this mechanism also has its problems. These large volumes of surplus products are considered by many to be wastage at the expense of third world countries, where millions face starvation. Furthermore this artificial method of raising prices thru taxes, disrupts free market trade resulting in resources being allocated inefficiently. Both income and price support mechanisms provide assistance to producers from dangers posed to them by the agricultural market, however both also present problems and it is my belief that a fine balance between the two systems would provide the best form of government intervention in order protect those within agricultural markets. ...read more.