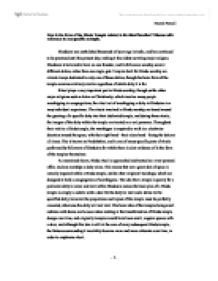 How is the form of the Hindu Temple related to its ritual function? Discuss with reference to one specific example.

How is the form of the Hindu Temple related to its ritual function? Discuss with reference to one specific example.

Hinduism was established thousands of years ago in India, and has continued to be practiced until the present day, making it the oldest surviving major religion. Hinduism is believed to have no one founder, and its followers worship several different deities, rather than one single god. Temples built for Hindu worship are almost always dedicated to only one of these deities, though the basic form of the temple remains relatively similar regardless of which deity it is for.

Ritual plays a very important part in Hindu worship, though unlike other major religions such as Islam or Christianity, which involve many people worshipping in congregations, the ritual act of worshipping a deity in Hinduism is a very individual experience. The rituals involved in Hindu worship are based around the greeting of a specific deity into their dedicated temple, and during these rituals, the images of the deity within the temple are treated as a real presence. Throughout their visit to a Hindu temple, the worshipper is required to walk in a clockwise direction around the space, with their right hand - their clean hand - facing the deity at all times. This is known as Pradakshina, and is one of many specific parts of rituals performed by followers of Hinduism for which there is clear evidence of in the form of the temples themselves.

As mentioned above, Hindu ritual is approached and treated as a very personal affair, and one worships a deity alone. This means that not a great deal of space is actually required within a Hindu temple, unlike other religions’ buildings, which are designed to hold a congregation of worshippers. The idea that a temple is purely for a particular deity to come and visit within Hinduism means the basic plan of a Hindu temple is simply a cubicle with a door for the deity to visit and a shrine to the specified deity, however the proportions and layout of the temple must be perfectly executed, otherwise the deity will not visit. This basic idea of the temples being small cubicles with doors can be seen when looking at the transformation of Hindu temple design over time, and originally temples would have been small, angular spaces with a door, and although this idea is still at the core of every subsequent Hindu temple, the features surrounding it inevitably became more and more elaborate over time, in order to emphasise ritual.

The first clear elaboration found in Hindu temple design is believed to be the addition of towers above the original small building with a door for the deity. This would allow the temple to be seen from a distance, so more people could actually come and worship there, and though these towers were not built for any particular ritual reasons, they mark the advances in temple design at the time, and have come to be known as representing several different ideas within Hinduism. Next, a design feature that would lead to emphasis on the main shrine of the building - a corridor between the entrance and the shrine - became popular. This idea itself became more and more elaborate, with many temples housing ornately carved corridor walls with decorative columns, creating an extravagant space for worshippers to visit and reinforce to them that this was a very special place. The ritual act of Pradakshina, the clockwise movement around the temple, was the catalyst for another development in the temple form, which involved building a small interior corridor surrounding the main shrine. This corridor, wide enough only for one worshipper at a time, allowing for individual worship, began to allow worshippers to fully encompass the shrine at the centre of the temple in a clockwise direction. A less common, but clear feature, is a wall being built around a Hindu temple, separating the temple within from the outside world. This marks the temple out as what can almost be described as a sanctuary, and the worshipper would presumably forget about any bad things from the outside world upon entering the temple grounds.

These carefully developed design features became commonplace amongst Hindu temples, and almost all of them emphasise and reinforce the ideas behind the rituals within Hinduism. The advances in temple design were almost entirely based around their function within the acts of ritual. Their focus is on the shrine in the centre of the temple, the deity to which it is dedicated, and emphasise the importance of that particular deity using space and shape. The features of the temple accentuate the idea of the individual worshipper and makes their visit to the temple even more personal, as the temple design must make the worshipper feel very close, both physically and spiritually, to the particular deity.

One temple that has all of these features is Laksmana at Khajuraho. This temple is dedicated to the deity Vishnu, and is one of around 30 temples at Khajuraho (Asthana, Gupta, 2002; 98) 10 of which are dedicated to Vishnu (Hoiberg, Ramchandani, 2000: 219). At the time Laksmana was built (954AD), Khajuraho was the capital town of the Candela rulers, and was a religious centre. The temple was built by the leader Yasovarman, to celebrate Candela independence (Mitter, 2001: 67), and was supposedly built in honour of a statue of Vishnu stolen from an enemy’s temple that was subsequently placed in the Laksmana temple. It is one of the earliest temples at Khajuraho (Nath, 1980: 37) and displays a very high level of craftsmanship in its build and sculptures (Asthana, Gupta, 2002: 98).

In terms of design, Laksmana is of the Nagara style of temple (Hoiberg, Ramchandani, 2000: 219), and heavily emphasises ritual worship, utilizing all the design features commonly found in Hindu temples. Its tall, elaborately decorated tower with a cascading, mountainous design is typical of the time, and enhances the temple’s appearance and visibility, as well as furthering ideas of several Hindu beliefs, such as their explanations for creation. An inscription in the temple envisions the tower of the temple rivalling the peaks of the Himalayan mountains (Mitter, 2001: 68), suggesting the temple was very highly regarded and important, and the tower was always intended to be incredibly impressive. The temple also has the Hindu temple characteristics of the corridor leading to the central shrine, and the corridor around the shrine itself, allowing for the extension of Pradakshina enabled by this design feature.

The religious meanings behind the temple form within Hinduism are numerous, and there are several different explanations for certain features being included in temple design. Many of these explanations refer to the cosmos, such is depicted using cosmic diagrams known as Mandalas within Hindu as well as Buddhist art, and ideas behind creation. Some see the towers of temples as being representations of a large mountain named Meru, which marks the centre of the universe and is where the world began, and others see the deity depicted at the centre of the temple as actually living there, and pushing outwards in all directions. These explanations can be easily understood when examining the architecture itself, represented within the angular, cascading designs found in so many Hindu temples, and in particular, their towers.

The architectural layout of Hindu temples is similar to that of other religions, in the way that is successfully serves its purpose of being a building for worship. However, it differs from those of other religions in that the rituals performed within and around the temple are very specific and personal, so the gradual development of characteristics within Hindu temple design shows the specific acts of ritual and how they came to affect the buildings they are performed in.

Since the importance of ritual is so great within the culture of Hinduism, it is obvious that ritual function would have an inevitable effect on the religious architecture. The architecture is purely based around the ritual practices and the purpose of every single minor extra detail is to emphasise the Hindu ritual. From looking at the design of a temple such as Laksmana, one of several temples at Khajuraho bearing the same form, the link between the building’s ritual function and its form become very clear, and the building’s layout could potentially be entirely different were its ritual functions not as they are.