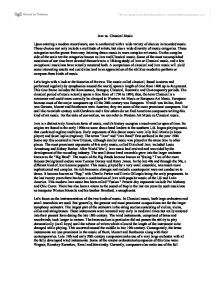 Jazz vs. Classical Music Upon entering a modern record store, one is confronted with a wide variety of choices in recorded music. These choices not only include a multitude of artists, but also a wide diversity of music categories. These categories run the gamut from easy listening dance music to more complex art music. On the complex side of the scale are the categories known as Jazz and Classical music. Some of the most accomplished musicians of our time have devoted themselves to a lifelong study of Jazz or Classical music, and a few exceptional musicians have actually mastered both. A comparison of classical and Jazz music will yield some interesting results and could also lead to an appreciation of the abilities needed to perform or compose these kinds of music. Let's begin with a look at the histories of the two. The music called classical, found in stores and performed regularly by symphonies around the world, spans a length of time from 1600 up to the present. This time frame includes the Renaissance, Baroque, Classical, Romantic and Contemporary periods. The classical period of music actually spans a time from of 1750 to 1800; thus, the term Classical is a misnomer and could more correctly be changed to Western Art Music or European Art Music. ...read more.

Currently, composers also make use of the full orchestra but with the addition of increasingly larger percussion sections which add many unique and unheard of sounds than in earlier music. Early Jazz music was played in small ensembles making use of clarinet, tuba, cornet, baritone, drums, and piano. Dixieland groups of New Orleans had similar instrumentation. During the Swing era, larger groups were employed to achieve more of an orchestral sound. The Big Bands of the this era were predominantly wind orchestras containing alto and tenor sax sections, trumpet and trombone sections, along with piano and drums. When Bop music arrived, the alto saxophone and trumpet were the preferred instruments of the major soloists who were backed up by piano, string bass and drums. With the advent of Fusion, electric instruments such as the electric guitar and keyboard synthesizer became prominent. How has each of these kinds of music been transmitted to later generations of musicians? Early in the evolution of classical music, a system of notation was gradually developed which for the most part remained stable from the Renaissance on. This gave the composer control over how his compositions were to be played. Throughout the history of Jazz, however, notation was more like a rough sketch. This was because the syncopated rhythms of ragtime and the melodic riffs of the blues were not easily notated. ...read more.

There are written accounts of other composer's improvisational abilities including Mozart (1756-1791), Beethoven (1770-1829), and Franz Liszt (1811-1886). Yet, as time went on, improvising gave way to the composer's desire to exert complete control over his music. By the late 19th century, improvising was rare and not used at all in public performances of classical music. In summation, we can say that Jazz and Classical music represent two approaches to Art Music. The Classical composer or performer has a long and rich body of music in written form that he uses to learn from while the Jazz musician uses a body of recorded music to learn. Because of its small size, the modern Jazz ensemble allows loose interaction while the symphony orchestra's large size and diversity of instruments provides many different sounds and wide dynamic range. In classical music the composer strives for control; he uses printed music to guide and direct the musicians through the conductor. In Jazz music, the songs are loosely composed, thus forming a basis for individual expression within an ensemble. When you go to hear a symphony, you hear an orchestra conducted by the conductor playing a composition. When you go to a Jazz club you hear a small jazz ensemble interacting and improvising a song. Both of these kinds of music provide rich expression and detail to the serious listener. They take different paths to reach their final form but give a person equal opportunities to appreciate the creative output of each. ...read more.