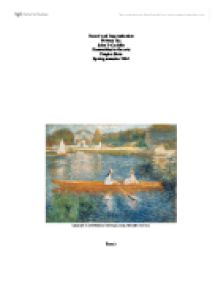 Renoir. &quot;Why shouldn't art be pretty? There are enough unpleasant things in the world.&quot; This quote was from Renoir when asked why he paints what he does

Renoir and Impressionism Written By: John D Conklin Humanities in the arts Empire State Spring semester 2004 Renoir By: John D Conklin Before going to the Guggenheim Hermitage Museum, located in the Venetian Casino in Las Vegas, NV, I never really went to view art anywhere. I have a few copies of paintings in my home that happen to catch my eye while walking by them. At the start of this art class, I finally to a close look at who had originally painted them. Most of the painting came from an Artist by the name of Pierre-Auguste Renoir. For some reason his works seemed really catch my eye. When I realized that I would traveling to Las Vegas, I said to myself I just had to take a closer look at Renoir's paintings. While viewing his paintings made me think about being happy, I wanted to find out more about them. ...read more.

He seems to be able to capture the feelings of happiness and peacefulness of the situation, and not go overboard with fine details in that painting. Renoir paintings seem to come from the heart. He had the ability to bring out great details in his work, without having to get to detailed. When he painted kids, he was able to show the innocence of childhood. In the painting called Girls picking flowers in a meadow, which I viewed at the Guggenheim Hermitage Museum, shows two young girls picking and playing with flowers. He used soft colors and blurred the meadow out. The picture makes me think back to childhood and just how carefree I was. My understanding of the world didn't go beyond trying to have fun with friends. That art piece held my attention for quiet a while. I found a happiness inside me that was brought out by the painting. ...read more.

Nobody painted the outdoors at that time and the group of artist I listed above became the first to do so. They first painted pictures of what they saw at a local lake and a nearby forest. The goal of these painting was to catch the "impression of the moment." These painters used quick and light brush strokes along with bright contrasting colors to show the effects of light (Artlino). "Why shouldn't art be pretty? There are enough unpleasant things in the world." This quote was from Renoir when asked why he paints what he does. I have to say that this quote best sums up my take on the impressionism movement of the late 1800's. If not for Renoir and the other painters of this movement, who knows what art would be like today. They brought color and lasting feelings into the world of art. I now understand why the painting of Renoir caught my eye when passing by them in stores. I can see what he was trying to capture with his use of colors and the scenes he chose to paint. ...read more.