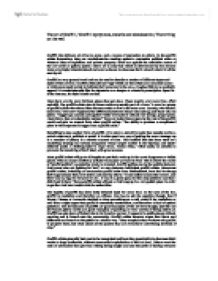 The art of Graffiti / Graffiti: spray cans, stencils and skateboards / The writing on the wall

The art of Graffiti / Graffiti: spray cans, stencils and skateboards / The writing on the wall Graffiti: the ultimate art crime to some, and a means of expression to others. To the graffiti artists themselves, they are revolutionaries reacting against a repressive political order or Western ideas of capitalism and private property. Some are against the restrictive nature of the art world or gallery system where art is only that which is determined by the curator. Many are simply misunderstood and want a chance to showcase their artwork where it will be seen by all. Graffiti is a very general word and can be used to describe a number of different types and styles of the art form. Graffiti artists all have 'tags' which are the artists own scrawled names or nicknames used mainly to indicate their presence in the area. ...read more.

Stencilling is also another form of graffiti. It is where a stencil is made that usually carries a certain statement, political or social. It is often used as a way of getting the same message up in a number of places, in a shorter amount of time. This method has also been used as a marketing strategy by various companies whose target market is the hip-hop and skater cultured youth. A clothing label in Cape Town, 'Circus Ninja,' relied solely on stencils to promote the launching of their label, with great success. Most graffiti artists will go to all lengths to put their work up in the most dangerous or visible places. This can cause conflict as suitable 'canvasses' are hard to find. This is where the world of "graffiti politics", so called by Mak1, is revealed. Graffiti politics can be the politics between rival crews who are fighting for 'turf,' or even between individual graffiti artists. ...read more.

Not all instances of graffiti are good examples of the art form though, just like not all framed gallery works are good examples of painting or even worthy of being called art. Graffiti has also been criticised due to its invasive manner, it appears in public places without warning and is forced onto the community. Graffiti artists however argue that flyers and billboards are forced on the public in a similar way. "They complain that we shove our graffiti in people's faces, but what about all the posters that are everywhere advertising all kinds of crap." Graffiti artists generally just want to be recognised and have the opportunity to showcase their works to large audiences, without commercial exploitation of the art form. Others want the rush of adrenaline they get from risking being caught and also the pride of having everyone see what they have accomplished. 'Chef,' a graffiti artist in Cape Town shared that "there is nothing better than the instantaneous gratification as the sun rises as there is your work for everyone to see." ...read more.