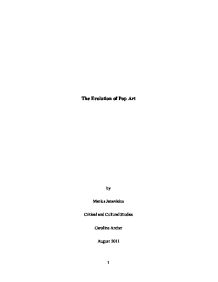 The Evolution of Pop Art

The Evolution of Pop Art by Marius Janavicius Critical and Cultural Studies Caroline Archer August 2011 During the 1960s Art Deco and Art Nouveau already were already established movements, which did not have the labels of "contemporary" styles. People were looking for something new, and shocking. Reactions towards established moral standards, social tensions which included race relations, s****l mores, women's rights gave birth to total reassessment of old values. It was born twice: first in England and then again, independently, in New York. During the early 1950s, several London artists transformed the artifacts and mass media imagery of American popular culture into critical, satirical art works. They were responding to a flood of American postwar export of consumer goods, movies, magazines, comics and advertising. However, Pop Art became popular movement in United States. After the Second World War came the birth of the consumer society. The American way of life, with its emphasis on growth, quantity, consumption and fun, dominated western values. However, underneath many of the same old dark forces raged on: war - Berlin, Korea, Vietnam; racial unrest; the political intolerance of the early 1950s. Among the young, new values awoke, and protest movements sprang up. ...read more.

As Andy Warhol, Lichtenstein also used vivid primarily colors, outlined with black lines. "The Ben-Day dots allow Lichtenstein's painting to look both more and less artificial. They signify mechanical reproduction, but they also add suggestions of light and reflection, shifting colors and variations in touch. The reflections would eventually lead to Lichtenstein's many portrayals of mirrors, but first they seem to have spawned ceramic sculptures and works in porcelain enamel on steel, a small selection of which is included in the Gagosian show. On their shiny surfaces, fake reflections and shadows - like the aggressive, tattoolike scattering of Ben-Day dots on "Head With Red Shadow" - compete with real ones."4 His work showed that comic slips have stylistic characteristics that follow aesthetic code. His works had traces of various styles including Cubism, Futurism and Surrealism: "All my art is in some way about other art, even if the other art is cartoons."5 Roberta smith of New York Times wrote: "The perfection of his paintings was achieved through extensive and beautiful preparatory studies, as indicated by his drawings retrospective at the Museum of Modern Art in 1987."6 What she wanted to say, was that Roy Lichtenstein was confident with his style and was true explorer of new trends. ...read more.

Popular culture had become too much a part of everyday living for artists, not to take note of it and bring it into their work, especially the form of popular culture that was most equivalent to fine art: graphic design. Not only was graphic design a legitimate subject for fine artists, but its motifs became accepted as aprt of visual language of art. Pop art is lots of things that high-art isn't - it's mass-produced, it is expendable, it is low-cost, glamorous, witty with bright lights and big celebrities - there's no sign of the impoverished artist slaving away in a tiny studio in this movement. With the techniques, available designers were enabled to produce large numbers of prints and helped the commercial art to: "Leap out of Soapbox Covers, Soup Cans, Plastic Packing, and Advertising, into a respectable bona fide art form."9 These aspects are the essential for the modern graphic designers, because nowadays they are not just an artists, but also suppliers, IT specialists and manufacturers. They are forced to keep constantly themselves in touch with the latest technology upgrades and various printing techniques; their work needs to be produced quickly and usually in big numbers. Graphic design often refers to both the process (designing) by which the communication is created and the products which are generated. Pop Art gives modern graphic designer massive choice of inspiration. ...read more.