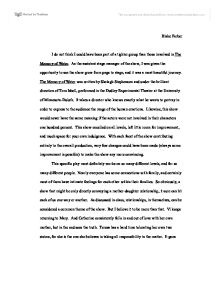 The Memory of Water

Blake Farber I do not think I could have been part of a tighter group than those involved in The Memory of Water. As the assistant stage manager of the show, I was given the opportunity to see the show grow from page to stage, and it was a most beautiful journey. The Memory of Water was written by Shelagh Stephenson and under the brilliant direction of Tom Isbell, performed in the Dudley Experimental Theater at the University of Minnesota-Duluth. It takes a director who knows exactly what he wants to portray in order to express to the audience the range of the human emotions. Likewise, this show would never have the same meaning if the actors were not involved in their characters one hundred percent. This show excelled on all levels, left little room for improvement, and much space for your own indulgence. With each facet of the show contributing entirely to the overall production, very few changes could have been made (always some improvement is possible) to make the show any more convincing. This specific play most definitely works on so many different levels, and for so many different people. Nearly everyone has some connections with family, and certainly most of them have intimate feelings for each other within their families. So obviously, a show that might be only directly conveying a mother-daughter relationship, it sure can hit each of us one way or another. ...read more.

I was fortunate enough to actually be part of the sound design. In the show some of my responsibilities were to ring the phone, slam the door, and make Teresa's crashing sound. I was intrigued to learn how the phone worked. But as to the elements that really enhanced the show, the waves that accompanied Vi and her blue lighting scheme were brilliant. The waves truly contributed to Vi's entity and her commanding presence. Each time as the lights faded into the blue, the waves came with them, and you knew it was then Vi's time to talk. The song that concluded the show was hands down the best piece of music that could have been considered for that final moment of the play. Nat King Cole has such a voice that really connects with you. Not much needs to be said by Cole, but you know the exact feeling when you hear it. The pre-show music was pretty well chosen, too. As it was calm and soothing, it left a sort of wondering atmosphere. The pre-show music was certainly a perfect selection for a post-death emotional status. For the most part, I enjoyed the costumes for each character. Mary's comfortable, yet semi-professional clothing she wore to bed seemed to work. Catherine's bright colors and many accessories fit her eccentric personality. Mike was portrayed as a very important person, a doctor. ...read more.

Andy surely makes it not difficult for the audience to empathize with him, even though he is having an affair. I personally never thought I could tolerate an adulterer, but the feelings that Andy brings to the character of Mike, you must feel sorry for him. Lastly, Kyle Bosley played the Frank I envisioned when I first read the script. Frank is the man who is completely unhappy with his current situation in life. Usually calm and fairly easy-going, we do not actually see the easy-going part of Frank as much. He is so bothered by his train ride and fed up with work, that all of these feelings finally come toppling down when he tells Teresa about his pub. His objective is clear; all he wants is his own satisfaction and happiness. It was such an honor to work on this show, a show that you have a range of emotions with. I loved the show, every part of it. All of the design elements complemented each other to the greatest degree. The only major facet I would change, would be Teresa's costume. Other than that, the show was top notch. Acting was superb, I did not have a hard time believing one of the characters, they all worked together so well. It is not hard to believe they are all dear friends; that can be seen from each character's chemistry onstage with one another. This is truly a show that has inspired me to become more involved with UMD's theatre department. ...read more.