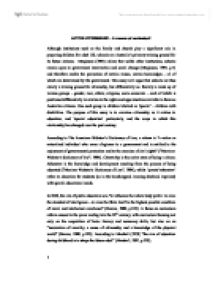 ACTIVE CITIZENSHIP - A means of exclusion? Although institutions such as the family and church play a significant role in preparing children for adult life, schools are Australia's primary training ground for its future citizens. Marginson (1997) claims that unlike other institutions, schools remain open to government intervention and social change (Marginson, 1997, p.5) and therefore enable the promotion of certain values, certain knowledges - all of which are determined by the government. This essay will argue that schools are thus clearly a training ground for citizenship, but differentially so. Society is made up of various groups - gender, race, ethnic, religious, socio-economic - each of which is positioned differentially in relation to the rights and opportunities available to them as Australian citizens. One such group is children labelled as 'special' - children with disabilities. The purpose of this essay is to examine citizenship as it relates to education, and 'special education' particularly, and the ways in which this relationship has changed over the past century. According to The American Webster's Dictionary of Law, a citizen is "a native or naturalized individual who owes allegiance to a government and is entitled to the enjoyment of governmental protection and to the exercise of civil rights" ("Merriam-Webster's dictionary of law", 1996). ...read more.

The Martin Report of 1964 (Martin, 1964) states "it is both beneficial and realistic to regard education as a form of national investment in human capital" (Mrtin 1964, pp.1-2). The economic growth of the nation was thus linked directly to education. Peter Karmel, a member of the Martin Committee used the link between education and economic growth to justify the extension of citizenship via education: "I believe democracy implies making educational opportunities as equal as possible and that the working of democracy depends on increasing the numbers of citizens with the capacity for clear and informed thought on political and social issues" (Karmel 1962, cited in (Marginson, 1997, p.36)). Although citizenship was clearly a primary goal of education throughout the 20th century, it becomes apparent that various groups are positioned differentially in respect to the achievement of this goal. Disability is an issue that has largely been ignored in 20th century citizenship discourse. Early definitions of disability included terms such as impairment and handicap - a handicap being a "disadvantage for a given individual, resulting from an impairment or a disability that limits or prevents the fulfilment of a role that is normal for that individual" (Madden & Hogan, 1997, p.14). ...read more.

The link between citizenship and education has remained constant throughout the 19th and 20th centuries. However, in relation to children with disabilities, it can be seen that the nature of this link has changed. According to popular discourse, a primary purpose of education in the late 20th century was the promotion of a more inclusive society, with all individuals participating in an active role. The reality however, is that in any society, different groups of individuals are positioned differentially in relation to 'active' citizenship: by race, by class, by gender and by ability or disability (L. Davies, 2001, p.301). There are now greater attempts to include this previously excluded group of children, and by opening up educational opportunities, this group is thus more able to 'participate' in an active form of citizenship. This change is evidenced by the establishment of special schools specifically for children with disabilities and further by the integration policies of the late 20th century As Keating argued in 1995 -"education is a foundation of the nation's culture and strength" (Keating 1995, cited in (Marginson, 1997, pp.89-90)). Education is society's chosen agency for citizenship - an active citizenship, but different groups are positioned differentially to participate in such an active role, as has been shown in the case of children with disabilities. ...read more.