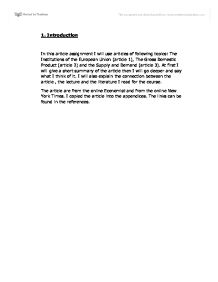 1. Introduction In this article assignment I will use articles of following topics: The Institutions of the European Union (article 1), The Gross Domestic Product (article 2) and the Supply and Demand (article 3). At first I will give a short summary of the article then I will go deeper and say what I think of it. I will also explain the connection between the article , the lecture and the literature I read for the course. The article are from the online Economist and from the online New York Times. I copied the article into the appendices. The links can be found in the references. Lonely at the top Summary The president of the European Commission, Jos� Manuel Barroso, has to run for re-election this year. The Party of European Socialists will try to block his election. The centre-right leaders who hold power in most of Europe stands behind Mr. Barroso and want him further five years at the top. Personal comment At first I found the article difficult to read, because there are a lot of difficult words and new names in it. But after I looked some things up, I finally understood what was said. ...read more.

I think it is quite good that the author compared more than two countries with each other, he compared four countries and the average of all European countries. I want include that I think it is great that the author used current numbers to explain the topical situation of the European economy. I have read a lot of articles about the financial crisis and I am still very interested of it. This article gave me a lot of topical information. After reading the article you are up-to-date with the topic. I miss some basics in the article. You have to know a lot of general information about the crisis to understand all of it. I think the connection between this article- the lectures Macro Economics & Law- and the literature I have read for the course is that this article use the GDP to measure the current situation. The abbreviation "GDP" stands for Gross Domestic Product. The GDP is a basic measure of a countries economic performance. The most common approach to measuring and quantifying GDP is the expenditure method. As we discussed it in class the formal is: C+I+G+(X-M) ...read more.

The capacities of the factories are not running at full capacity and a lot factories have actually closed. I think the article could be about many economies during the financial crisis. I think it is really interesting to see the theory in a real economy. Further I think the reaction of the Chinese government is quite interesting especially because the Chinese government plays a greater role in the market an in prices than many governments in the west. In the beginning of the crisis the Government has been very aggressively expanding the countries money supply. This is a common method to decrease the consumer consumption. The author of the article wrote also about the real estate prices in China. The index of real estate prices in 70 Chinese cities fell and could also be a possible hint of deflation. Further in the article you can read about the Consumer Price Index and the Producer Price Index. The Consumer Price Index (CPI) and the Producer Price Index are the most widely used measures of inflation and deflation. So the article is a good example for using this measures. I think the article is educational because you get a lot of topical information with a good explanation. 5. ...read more.