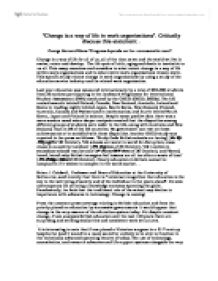 &quot;Change is a way of life in work organizations&quot;. Critically discuss this statement .

"Change is a way of life in work organizations". Critically discuss this statement . George Bernard Shaw "Progress depends on the unreasonable man". Change is a way of life for all of us, all of the time as we and the world we live in evolve, rotate and develop. The life cycle of birth, aging and death in inevitable to us all. This essay examines and considers to what extent change is a way of life within work organisations and to what extent work organisations remain static. This specific study relates change in work organisations by using a study of the education service industry and its related work organisation. Last year education was measured internationally by a total of 265,000 students from 32 nations participating in the landmark Programme for International Student Assessment (PISA) conducted by the OECD (OECD, 2002a). The UK ranked seventh behind Finland, Canada, New Zealand, Australia, Ireland and Korea in reading; eighth behind Japan, South Korea, New Zealand, Finland, Australia, Canada and Switzerland in mathematics; and fourth behind South Korea, Japan and Finland in science. Despite some positive data there was a more sombre mood when deeper analysis revealed that the disparities among different groups of students were wider in the UK, along with Australia and New Zealand, than in 29 of the 32 countries. No government can rest on these achievements or be satisfied with these disparities. Another OECD study was reported in the press as follows: 'Study finds British schools are boring' (Daily Telegraph of 30 October), 'UK schools are worst in world for disruption; class chaos is caused by boredom' (The Express of 30 October), 'UK tumbles in secondary schools results table' (Financial Times of 30 October), and 'Bored, bored, bored: why British teenagers feel lessons are all too often a waste of time' (The Independent of 30 October). Clearly education in Britain cannot be complacent if it wishes to compete in the world market. ...read more.

He also stated that inevitably radical change almost always arouses controversy. So why change? Is it because the British education system has always been inadequate? Is it because society has and is changing and education strives to catch up? Is it because of economic pressure and demands of skills in the workplace or changes in the workforce? David Milliband Minister of State for Schools identifies five factors as the key to change, moving from good to great: Excellent leaders - people with passion for raising standards, but an unwavering openness to change and faith in people rather than structure. A resolute focus of people - not some bolted-on driver but placed right at the heart of change. How the best organisations shatter their ceilings of mediocrity. The strength to use data - facts that tell you what's not working as much as what is. Unshakeable tenacity - to go from build-up to breakthrough, no matter how long or hard the road and finally a readiness to use technology as a means for transformation rather than just a way to do the same things quicker. Caldwell describes educational change and status quo by using a model of scenarios. Two scenarios extend the status quo: Scenario 1: 'Robust bureaucratic school systems' characterised by strong bureaucracies and robust institutions; vested interests resisting fundamental change; and continuing problems of school image and resourcing. Scenario 2: 'Extending the market model' characterised by widespread dissatisfaction leading to a re-shaping of public funding and school systems; rapid growth of demand-driven 'market currencies', indicators and accreditation; and greater diversity of providers and professionals, along with greater inequality. These two scenarios bring change but within set parameters. Two scenarios apply to re-schooling: Scenario 3: 'Schools as social core centres' characterised by high levels of public trust and funding; schools as centres of community and social capital formation; and greater organisational and professional diversity as well as greater social equity. ...read more.

If it's not broken don't fix it! David Milliband How we move from a situation where we are high in international tables for average performance, but also have high inequality linked to social class, to one where we raise average performance but also overcome the power of home background to determine life changes. How we move from raising standards fastest in the poorest areas at primary levels, to delivering genuine opportunity in secondary education to the 83 per cent of working class children who currently do not reach university entrance standards. If we do these things, we will not just change our education system, we will change our country. That is what is at stake. schools are one part of a broader reform programme. Let me be frank about its origins. There is a tension at the heart of public service reform. Set people working in the public services free and simply let them get on with it and the risk is that those who fail to provide a good serviced carry on failing. And failure for pupils or patients is the greatest inequality there can be. But go to the other extreme, try to raise standards by central diktat, by bureaucratic edict and you risk stifling the very creativity that produces high standards. We are trying to resolve that dilemma by national frameworks where necessary; but then granting greater and greater freedom on the basis of performance. In addition, we are trying to break down the old demarcations in employment. The aim is a system of far greater diversity of supply and flexibility in working. Hence specialist schools, foundation hospitals, PCTs and all the reforms to employment conditions. I sense there is now a global consensus on expectations for schools and this is the vision to which I subscribe. It may be summarised in these words: All students in every setting should be literate and numerate and should acquire a capacity for life-long learning, leading to success and satisfaction as good citizens and productive workers in a knowledge economy. Change is beneficial to advance of civilisation , to technology, to organisational efficiency. ...read more.