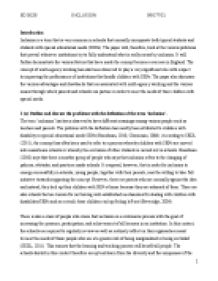 ﻿ED3028 INCLUSION 0907701 Introduction Inclusion is a term that is very common in schools that normally incorporate both typical students and students with special educational needs (SENs). The paper will, therefore, look at the various problems that prevail whenever institutions try to fully understand what is really meant by inclusion. It will further demonstrate the various factors that have made the concept become a success in England. The concept of multi-agency working has also been observed to play a very significant role with respect to improving the performance of institutions that handle children with SENs. The paper also discusses the various advantages and drawbacks that are associated with multi-agency working and the various means through which parents and schools can partner in order to meet the needs of their children with special needs. 1 (a) Outline and discuss the problems with the definition of the term ?inclusion?. The term ?inclusion? has been observed to have different meanings among various people such as teachers and parents. The problem with the definition has mostly been attributed to children with disability or special educational needs SENs (Boardman, 2010; Cheminais, 2006). According to SEDL (2011), the concept has often been used to refer to a process whereby children with SENs are moved into mainstream schools or whereby the exclusion of other students is carried out in schools. Boardman (2010) says that there is another group of people who says that inclusion refers to the changing of policies, attitudes, and practices inside schools. It is agreed, however, that in order for inclusion to emerge successfully in schools, young people, together with their parents, must be willing to take full initiative towards supporting the concept. However, there are parents who are normally against the idea and instead, they lock up their children with SEN at home because they are ashamed of them. There are also schools that are known for not having well-established mechanisms for dealing with children with disabilities/SENs and as a result, these children end up feeling left out (Beveridge, 2004). ...read more.

Ainscow (2006) argues that one of the hindrances of effectively implementing inclusion is the lack of practical and applied training of regular teachers that can cope with the demands of children with SENs. These difficulties faced by educators are largely not addressed by the civil rights advocates of inclusion, depending on schools to make these adjustments for themselves, resulting into children with special needs being placed in institutions that do not have the necessary personnel that have specialized training to teach them (Barton and Armstrong, 2007; Miles and Singhal, 2008). The advocates of inclusion due to the merits of placing them in regular school environment based on the role model concept and adaptive behaviour suffers from the reality that not all regular school environments are the same and that children behave or react differently when placed in a specific scenario or setting. The study of Gidley et al. (2010) supports this argument, stating that access to facilities that provides children with specific needs is difficult because not all school environments are the same. For instance, students that have hearing problems will experience difficulty in communicating with regular students if sign language is not included in the school in their curriculum, even though they are eligible for inclusion. Students that have autism can likewise experience difficulties if the regular students are not educated on the nature of their condition, resulting into feelings of social isolation and anxiety with these students. The study of Humphrey (2008) describes these difficulties as experienced by students that have autism, explaining that the emotional stress experienced by the students prevents them from learning, defeating the purpose of inclusion. The government's categorization system that identify eligible children for inclusion do help (Florian, 2007; Daniels, 2000), but still results into too many children being left out (Ainscow, 2006; Hodkinson and Vickerman, 2009; Norwich, 2008), thereby defeating the purpose of the policy, since majority of children with SENs still remain in specialized schools or other similar institutions. ...read more.

This way, parents will be able to gain the trust of the teachers and the teachers will confidently engage in partnerships with the parents, knowing that the parents will also play the part of improving the performance of their children with SENs. There are families who do not know how to deal with their children who deserve special attention. In order to foster relationships with the parents, teachers need to make it their responsibility to visit the homes of children with SENs. In this context, the teachers are able to see how these parents relate with their children. This way, the teachers will be able to spot any weaknesses with the parents-children relationship and as a result, train the former on effective means of addressing the needs of their children effectively (Family Education, 2011). Ainscow (2006) says that this will make the parents feel that their children are loved and appreciated and thus, the parents will be more open to the teachers and be ready to build long-lasting relationships with them regarding the development of the wellbeing of their children. Conclusion From the analysis, it is evident that inclusion is a concept that, when adopted, would result to the needs of special children being met adequately. Many sources have stated that the problems associated with the inclusion educational policy of England is because of the lack of unifying focus on what inclusion is supposed to be and the strategies used to implement it on the operational level to meet the primary objectives of policy. As of now, the improvements can still be made on how the policy is implemented, and collaboration and communication between the involved agencies is an effective strategy to implement these strategies. It is, therefore, recommended for institutions to ensure that they adopt both the concept of inclusion and multi-agency working in order for them to effectively provide the needs of children with special needs both in schools and at the children?s own homes. Word Count -3835. ...read more.