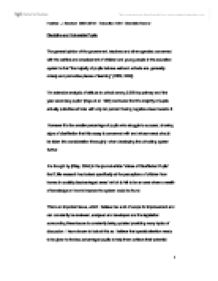 Discipline and Vulnerable Pupils The general opinion of the government, teachers and other agencies concerned with the welfare and development of children and young people in the education system is that "the majority of pupils behave well and schools are generally orderly and productive places of learning" (DfES, 2006). "An extensive analysis of attitude to school among 2,250 top primary and first year secondary pupils" (Keys et al. 1995) concluded that the majority of pupils actually quite like schools with only ten percent having negative views towards it. However it is the smaller percentage of pupils who struggle to succeed, showing signs of disaffection that this essay is concerned with and whose needs should be taken into consideration thoroughly when developing the schooling system further. It is thought by (Riley, 2004) in the journal article 'Voices of Disaffected Pupils' that 'Little research has looked specifically at the perceptions of children from homes in socially disadvantaged areas' which is felt to be an area where a wealth of knowledge on how to improve the system could be found. This is an important issue, which I believe has a lot of scope for improvement and can constantly be reviewed, analysed and developed and the legislation surrounding these issues is constantly being updated providing many topics of discussion. I have chosen to look at this as I believe that special attention needs to be given to the less advantaged pupils to help them achieve their potential. Pupils showing signs of disaffection often exhibit many kinds of poor behaviour including being disruptive, truancy, and conflicts with teachers, and low effort levels in their work, physical violence towards teachers and other pupils and sexual misconduct. There can be a plethora of reasons that pupils behave in these ways including not having the cognitive, physical, social and emotional skills necessary to understand and follow school rules and procedures, pupils may be experiencing some kind of trauma or pupils may have the skills needed to follow rules and achieve well but simply choose not to do so. ...read more.

The issue of having to travel a long way to go to school because the emergency housing they have been provided with is in an area where all the schools are full can cause considerable stress to these pupils making them more tired because of a longer day, having transport issues, having a limited social network or having to constantly change schools and feeling very unsettled. The next group are children of travellers, there may be physical or practical barriers for them attending school for example they may not stay in an area long enough to get settled or even get a place at a school. The culture and lifestyle of travellers is very different from mainstream pupils and the National Curriculum may be perceived as negative, irrelevant or even harmful to the traveller lifestyle. The schools may not welcome these pupils and may see them as a waste of school time and money. They can often experience racism and bullying and stereotyping forcing them to not want to venture out of their own communities. Children in local authority care are often one of the first groups of vulnerable pupils to be identified at school due to the involvement of external agencies such as the social services making the school aware of the child's circumstances. These children may be facing both emotional and practical difficulties participating successfully in education. A lack of stability in housing and location of care homes with children being moved from one place to another can cause many problems, as is the case with asylum seekers mentioned earlier, with travel to school being difficult and general disruption experienced on a regular. Social workers may be more concerned with the immediate risk to that child, for example getting them away from an abusive household rather than on the child's education. Carers may lack the time and or the skills to deal with a child's educational needs. ...read more.

by making the wrongdoers confront their victims. However the true success of these can only be recognised after careful monitoring of the specific initiative. The main point to this is the recognition of those students at risk and putting every possible resource to good use to keep them well supported and in education and recognising the social factors that can hinder a child's development. If there was a greater focus on prevention there would not have to be the great effort put in to dealing with the after effects of the lacking system. There are many theories that state that exclusion leads to criminal activity so therefore if greater efforts were made to prevent and minimise all kinds of exclusion and give every child an education suited to their need it would benefit society as a whole and save government money and time in the long run when these children become adults stuck in a cycle of criminal behaviour and underachieving. Word count- 2,737 Reference List DfES, 2006 Education and Inspections act 2006 DfES, 2005 The Schools White Paper," Higher Standards, Better Schools for All- more Choice for Parents and Pupils" DfES, 2005 Every Child Matters: Change for Children in Schools Independent on Sunday, taken from Da Vision, 2007 How Schools Fail Black Boys taken from www.provision.org.uk/How Schools Fail Black Boys.htm on 16th December 2007 Keys, W. Harris, S. and Fernandes, C. 1995 Attitudes to school of top primary and first-year secondary pupils (Slough, NFER) et al. 1995 John, G. 2007 Plan to help black boys achieve, BBC News at the NUT conference, 9th April 2007Taken form http://news.bbc.co.uk on 16th December 2007 Lyall, J. 2006 Schools take on teen pregnancy, Guardian Unlimited Wednesday October 11, 2006 National Literacy Trust, 2007 Truancy and school exclusions taken from www.literacytrust.org.uk/socialinclusion/youngpeople/indexexclusions.html on 14th December 2007 Riley, K.A. 2004 'Voices of Disaffected Pupils' British Journal of Educational Studies, ISSN 007-1005 Vol, 52, No.2, June 2004, pp166-179 Taylor. M, Ward. L, 2005 School reforms 'could disadvantage vulnerable pupils' Guardian Unlimited Wednesday November 30, 2005 ?? ?? ?? ?? Heather .J. Bamford G20139731- Education 1201- Charlotte Barrow 1 ...read more.