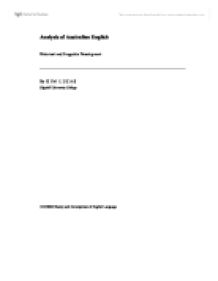 Mesolect is spoken by the majority of AusEng speakers and is a kind of broad in-between of acrolect and basilect. It should also be noted that a study by Barbara Horvath (1985) recognised a further two categories, 'Accented' and 'Ethnic Broad', which recognised ethnic influences. Kim Lucas 5 Linguistic Features of Australian English Altough often compared to British English, many linguistic features of Australian English that are unique and therefore are not associated with British English. Linguistic features connected with Australian English include intonation patterns, pronunciation and vocabulary. It should be noted that there is a distinct lack of grammatical differences. (i) Phonetic and Phonological Features * The Cultivated and General accents of Australia appear to use 24 consonants, 11 vowels and 8 diphthongs * There is no post-vocalic /r/ within this variety: art hair Speakers of Australian English do not worker pronounce /r/ in any of these words * /h/ of 'aitch' is pronounced. Kim Lucas 6 * Fronted /a/. This is a similar feature to that of Southern Irish and the Liverpool or 'Scouse' variety of British English. Examples of this include the words dark, calm and heart. This appears to apply to Australian English vowels in general. * Neutral vowel suffix's rather than the /i/ of RP. This can be seen if we look at the words boxes, dances, darkest, velvet and acid, as suggested in The Oxford Companion to the English Language. ...read more.

A significant landmark within the linguistic development came in 1987 with the publication of Joseph Lo Blanco's National Policy on Languages. This was a report commissioned by the Commonwealth Department of Education (1986). It existed with the intention of not only improving the teaching of English as both a first and second language but also to promote bilingualism and to preserve and foster the teaching of community languages, including Aboriginal language, as noted in The Oxford Guide to World English. However, it would appear that during the 1990's the Federal authorities have relaxed their principles that guided the policy which has resulted in retreats from the policy, encouraging the Australian Alliance for Languages to be convened. This alliance believes that '(a)ll language policies in Australia, at state or federal level, should be characterised by a wide set of aims and goals and, specifically, should aim to benefit Australia and the national interest in enrichment, equality and external engagement'. As we have seen, Australian English has many features unique to its variety, ranging from lexis to phonological. As with any variety of English, Australian English varies with gender, class and ethnicity and will undoubtedly continue to do so within the future. As previously mentioned, Australian English has a relatively short history which makes it difficult to predict the future. However, it is probable that immigrants will have an affect on this particular variety of English, regardless of the impact. ...read more.