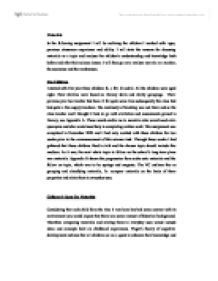 In the following assignment I will be outlining the children I worked with: ages, previous classroom experience and ability.

Materials In the following assignment I will be outlining the children I worked with: ages, previous classroom experience and ability. I will state the reasons for choosing materials as a topic and analyse the children's understanding and knowledge both before and after their science lesson. I will then go on to analyse my role as a teacher, the successes and the weaknesses. The Children I started with five year three children: S, J, ST, G and O. All the children were aged eight. Their abilities were based on literacy skills and ability groupings. Their previous year two teacher had been ill for quite some time subsequently the class had had quite a few supply teachers. The continuity of teaching was not there and so the class teacher and I thought it best to go with elicitation and assessments gained in literacy, see Appendix A. These would enable me to ascertain who would need extra synonyms and who would need help in completing written work. This assignment was completed in November 2003 and I had only worked with these children for two weeks prior to the commencement of this science task. Through these weeks I had gathered that these children liked to talk and the chosen topic should include this medium. As it was, the next whole topic to follow on the school's long-term plans was materials. Appendix B shows the progression from rocks onto materials and the follow on topic, which was to be springs and magnets. The NC outlines this as grouping and classifying materials, 1a: compare materials on the basis of there properties and relate them to everyday uses. Children's Ideas On Materials Considering that each child from the time it was born has had some contact with its environment you would expect that there was some amount of historical background. ...read more.

It seems that S, G, St and O will look for learnt knowledge through suggested viewpoints already outlined and then deduct new information based on historical information. They understand that objects are made from different substances and can recognise familiar non-confrontational materials, but get stuck on how to scale down the area of scope in the unfamiliar. This is something I need to address in their learning. Nobel (1991) reiterates the Goethe idea of wholeness in science and stipulates that: In his research he did not concentrate one-sidedly on the object itself but above all on objects set into their whole context. Page 110 My learning as a teacher My aim in my teaching was to portray materials in their entirety. I wanted to convey a sense of beginning, which could be developed in future lessons. By using the elicitation as a guide I focussed on the classification grid, which is outlined in Littledyke et al., 2000 pages 60-61. Although it may seem a little high brow for year threes I believed it to be the best way to convey a higher thinking: a theological, spiritual understanding. Childs (1991) advocates this higher learning and states: The teacher should not hesitate to speak of ideals to the children which they will not understand, but which they will probably recall later. (Page112) The grid enabled the children to go beyond the senses and to judge and reason. Which helps them to break through into questioning and hypothesizing. As Nobel (1996) states: In contexts of knowledge it is a matter of inner, invisible knowledge, as opposed to outer, observable knowledge. (Page 164) As hair was one of the misconceptions, only explanation would suffice as opposed to practical experience of origin. ...read more.

S is also a level one working towards a level two. She shows good understanding of the properties of plastic and has demonstrated through her drawing/description of a drinking vessel that plastic can be hard as well as flexible, see Appendix? This draws reference from the intervention demonstration of the breaking glass versus plastic. She was able to group objects in relation to their materials, see Appendix? and has developed understanding of where materials originate from. The inclusion of "made by a scientist" in her description/ drawing, Appendix? demonstrates this. ST also developed better understanding of the properties of materials by describing metal as shiny yet also hard, see appendices? and? In his drawing/description he also chose to include that the spanner conducted electricity. This shows that he investigated his object and was able to see beyond the initial visual observation to find out what metals can do in relation to electrical conductivity. So he can pick out a material, name it, describe it and investigate it further. I would level St as level one rising to level two. His groupings still need work and we have not yet covered heating or mixing materials. G can also be best described as level one rising to level two because we have not yet investigated melting. His level description is based on his ability to illustrate the properties of an everyday object, hammer see Appendix?,. Through colour and labelling he has shown the relationship between worded properties and the properties of wood and metal. As the hammer has two materials it is commendable that he has labelled accurately, notice opaque and hard float in between the wood and metal, whilst once living and shiny are definitely placed next to the co-ordinating material. This shows understanding and comparing skills. ...read more.